Zero-downtime Deployment in Kubernetes with Jenkins

Ever since we added the Kubernetes Continuous Deploy and Azure Container Service plugins to the Jenkins update center, "How do I create zero-downtime deployments" is one of our most frequently-asked questions. We created a quickstart template on Azure to demonstrate what zero-downtime deployments can look like. Although our example uses Azure, the concept easily applies to all Kubernetes installations.

Kubernetes supports the RollingUpdate strategy to replace old pods with new ones gradually, while continuing to serve clients without incurring downtime. To perform a RollingUpdate deployment:

We'll use deployment of the official Tomcat image to demonstrate this:

If the Tomcat running in the current deployments is version 7, we can replace ${TOMCAT_VERSION} with 8 and apply this to the Kubernetes cluster. With the Kubernetes Continuous Deploy or the Azure Container Service plugin, the value can be fetched from an environment variable which eases the deployment process.

Behind the scenes, Kubernetes manages the update like so: 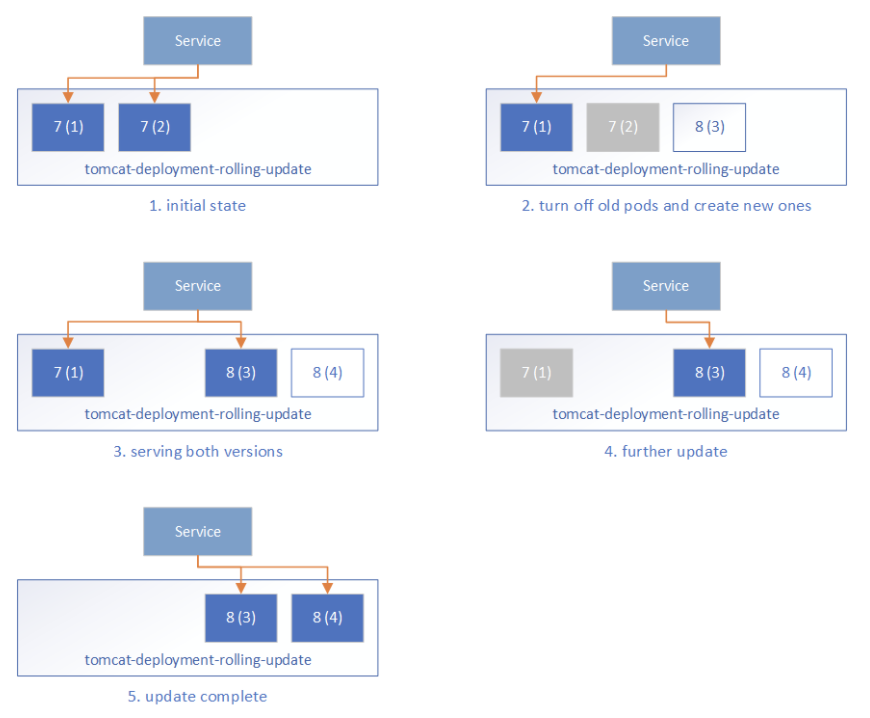 The Rolling Update strategy ensures we always have some Ready backend pods serving client requests, so there's no service downtime. However, some extra care is required:

Container technology offers a stand-alone environment to run the desired service, which makes it super easy to create identical environments as required in the blue/green deployment. The loosely coupled Services - ReplicaSets, and the label/selector-based service routing in Kubernetes make it easy to switch between different backend environments. With these techniques, the blue/green deployments in Kubernetes can be done as follows: 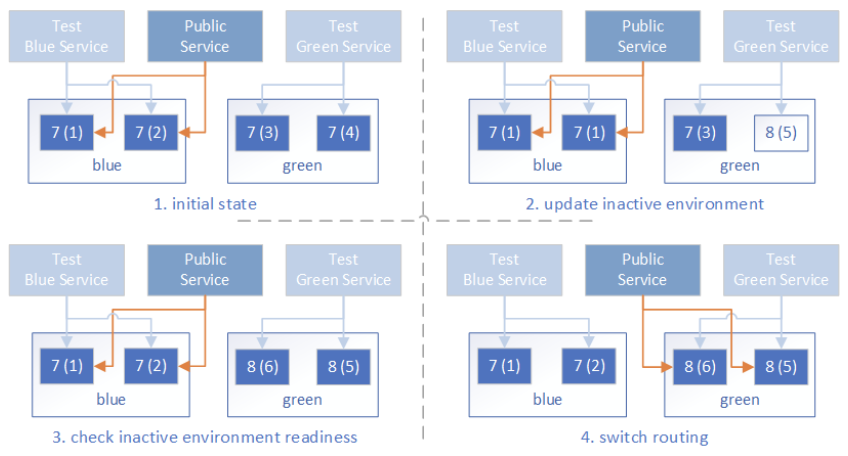 As compared to Rolling Update, the blue/green up* The public service is either routed to the old applications, or new applications, but never both at the same time.

Jenkins provides easy-to-setup workflow to automate your deployments. With Pipeline support, it is flexible to build the zero-downtime deployment workflow, and visualize the deployment steps. To facilitate the deployment process for Kubernetes resources, we published the Kubernetes Continuous Deploy and the Azure Container Service plugins built based on the kubernetes-client. You can deploy the resource to Azure Kubernetes Service (AKS) or the general Kubernetes clusters without the need of kubectl, and it supports variable substitution in the resource configuration so you can deploy environment-specific resources to the clusters without updating the resource config. We created a Jenkins Pipeline to demonstrate the blue/green deployment to AKS. The flow is like the following:

For the Rolling Update strategy, simply deploy the deployment configuration to the Kubernetes cluster, which is a simple, single step.

Put It All Together

We built a quickstart template on Azure to demonstrate how we can do the zero-downtime deployment to AKS (Kubernetes) with Jenkins. Go to Jenkins Blue-Green Deployment on Kubernetes and click the button Deploy to Azure to get the working demo. This template will provision:

Follow the Steps to setup the resources and you can try it out by start the Jenkins build jobs.