WSL+Docker: Kubernetes on the Windows Desktop

New to Windows 10 and WSL2, or new to Docker and Kubernetes? Welcome to this blog post where we will install from scratch Kubernetes in Docker KinD and Minikube.

Why Kubernetes on Windows?

For the last few years, Kubernetes became a de-facto standard platform for running containerized services and applications in distributed environments. While a wide variety of distributions and installers exist to deploy Kubernetes in the cloud environments (public, private or hybrid), or within the bare metal environments, there is still a need to deploy and run Kubernetes locally, for example, on the developer's workstation.

Kubernetes has been originally designed to be deployed and used in the Linux environments. However, a good number of users (and not only application developers) use Windows OS as their daily driver. When Microsoft revealed WSL - the Windows Subsystem for Linux, the line between Windows and Linux environments became even less visible.

Below, we will cover in brief how to install and use various solutions to run Kubernetes locally.

Since we will explain how to install KinD, we won't go into too much detail around the installation of KinD's dependencies.

However, here is the list of the prerequisites needed and their version/lane:

And that's actually it. For Docker Desktop for Windows, no need to configure anything yet as we will explain it in the next section.

Once everything is installed, we can launch the WSL2 terminal from the Start menu, and type "Ubuntu" for searching the applications and documents:

Once found, click on the name and it will launch the default Windows console with the Ubuntu bash shell running.

As we are working, normally, on our local computer, it might be nice to update the sudoers and set the group %sudo to be password-less:

Before we move to the Docker Desktop settings, let's update our system and ensure we start in the best conditions:

Before we move into the settings, let's do a small test, it will display really how cool the new integration with Docker Desktop is:

You got an error? Perfect! It's actually good news, so let's now move on to the settings.

First let's start Docker Desktop for Windows if it's not still the case. Open the Windows start menu and type "docker", click on the name to start the application:

You should now see the Docker icon with the other taskbar icons near the clock:

Now click on the Docker icon and choose settings. A new window will appear: 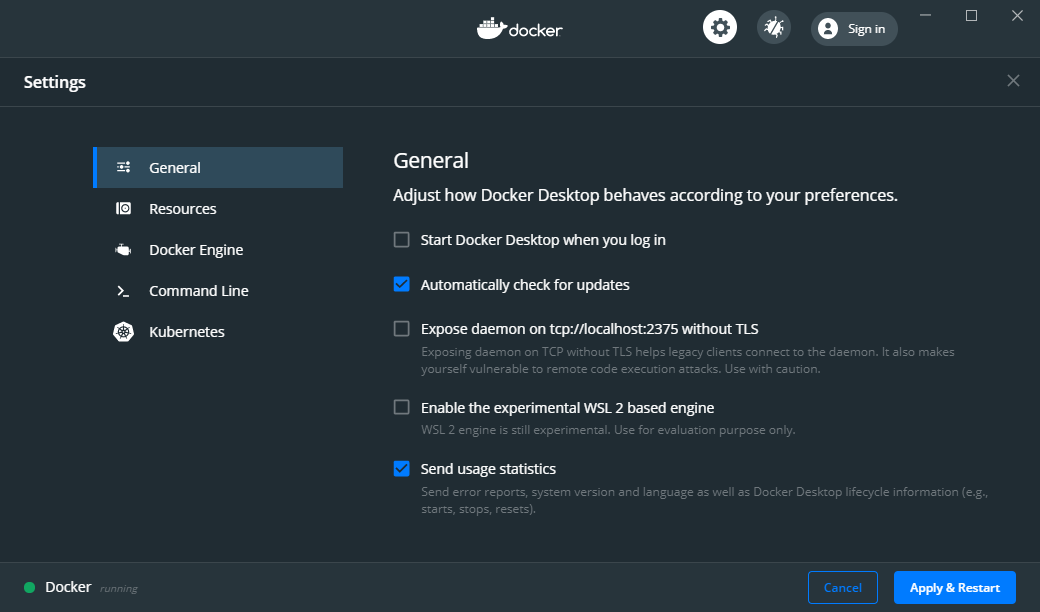 By default, the WSL2 integration is not active, so click the "Enable the experimental WSL 2 based engine" and click "Apply & Restart": 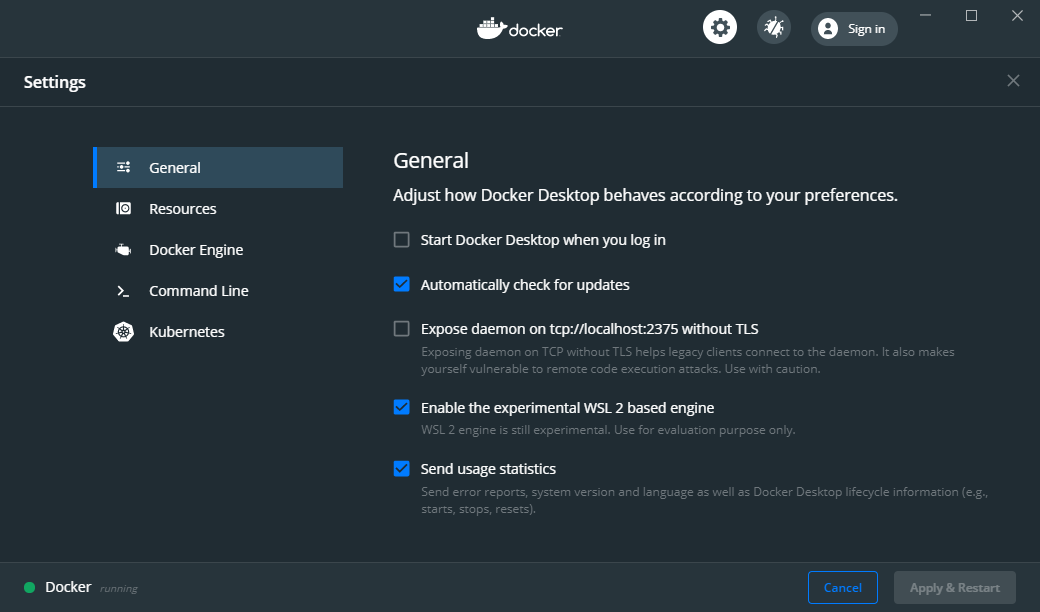 What this feature did behind the scenes was to create two new distros in WSL2, containing and running all the needed backend sockets, daemons and also the CLI tools (read: docker and kubectl command).

Still, this first setting is still not enough to run the commands inside our distro. If we try, we will have the same error as before.

In order to fix it, and finally be able to use the commands, we need to tell the Docker Desktop to "attach" itself to our distro also: 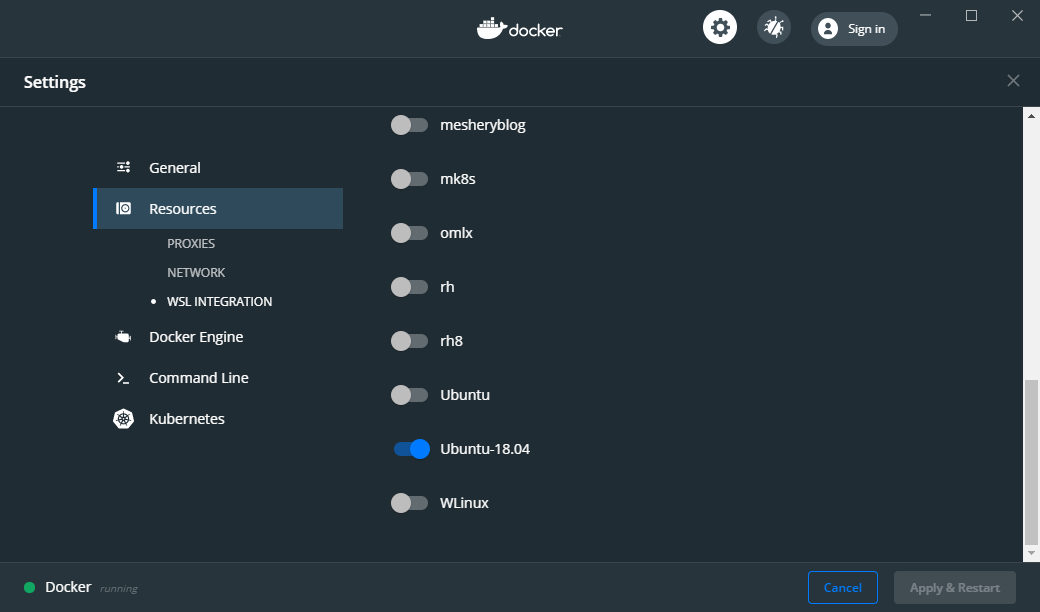 Let's now switch back to our WSL2 terminal and see if we can (finally) launch the commands: 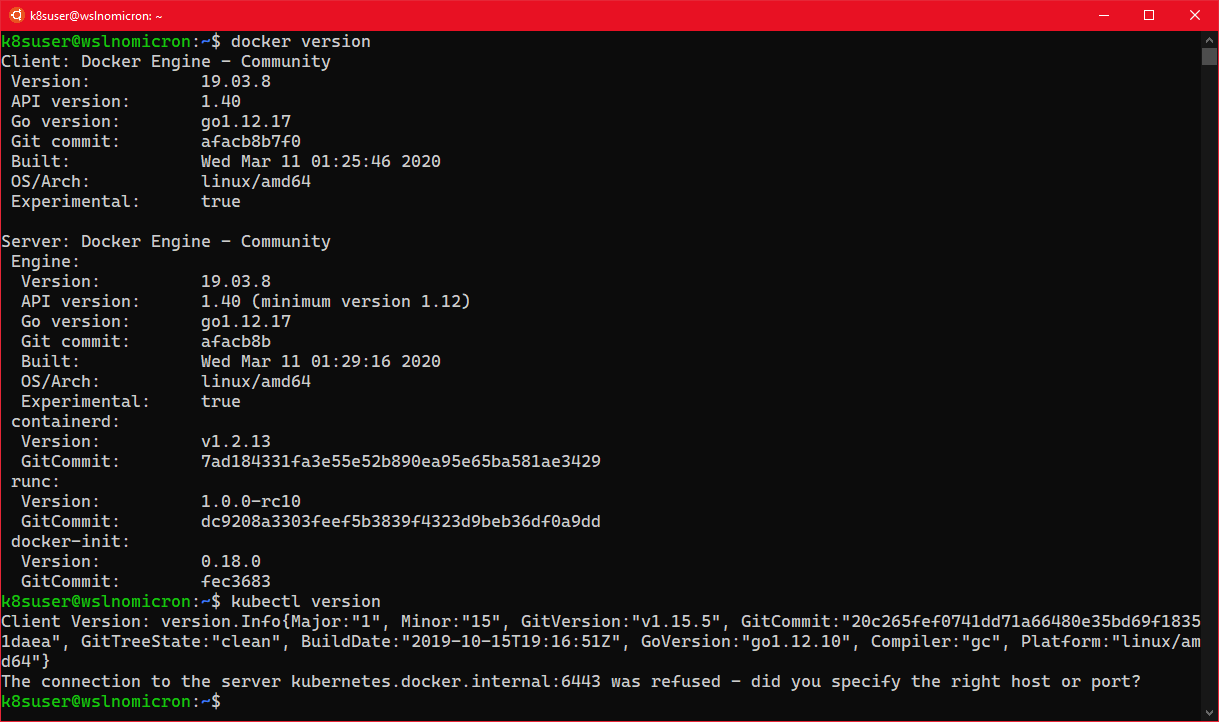 Tip: if nothing happens, restart Docker Desktop and restart the WSL process in Powershell: Restart-Service LxssManager and launch a new Ubuntu session

And success! The basic settings are now done and we move to the installation of KinD.

KinD: Kubernetes made easy in a container

However, if we look carefully at the kubectl command, it found the "Client Version" (1.15.5), but it didn't find any server.

This is normal as we didn't enable the Docker Kubernetes cluster. So let's install KinD and create our first cluster.

And as sources are always important to mention, we will follow (partially) the how-to on the official KinD website: 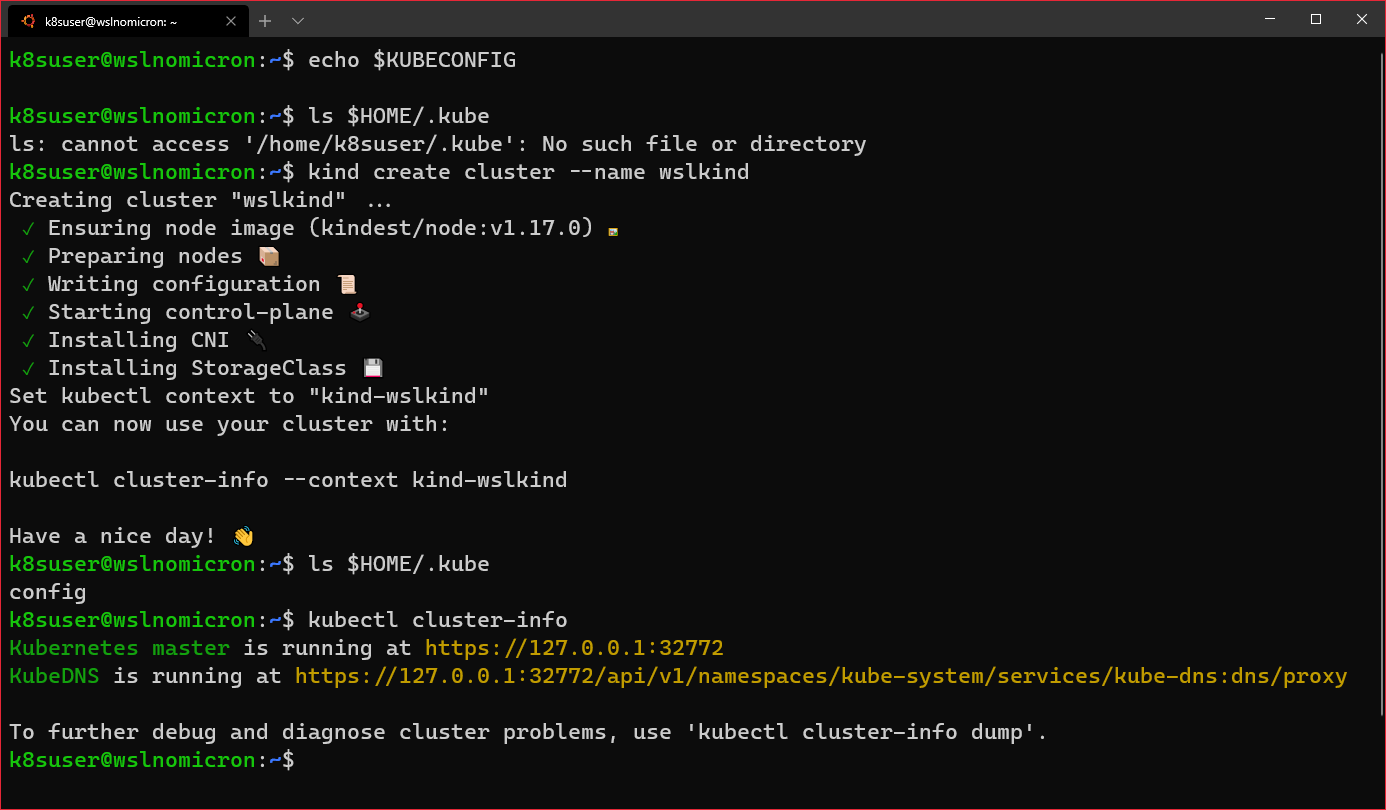 The cluster has been successfully created, and because we are using Docker Desktop, the network is all set for us to use "as is".

So we can open the Kubernetes master URL in our Windows browser: 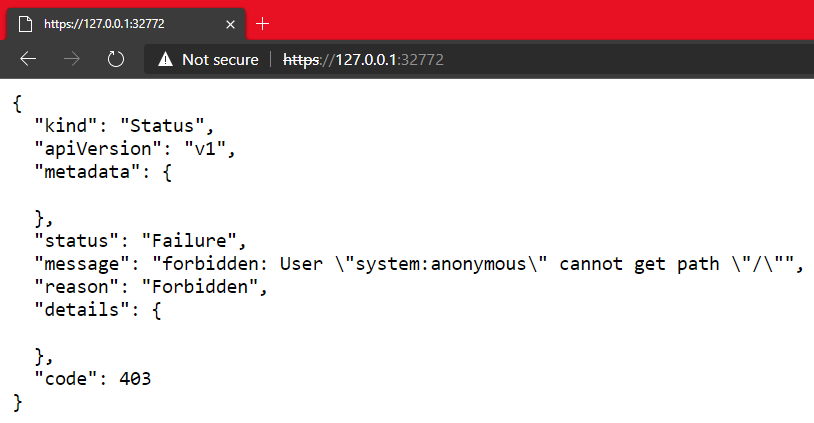 And this is the real strength from Docker Desktop for Windows with the WSL2 backend. Docker really did an amazing integration.

Our first cluster was created and it's the "normal" one node cluster: 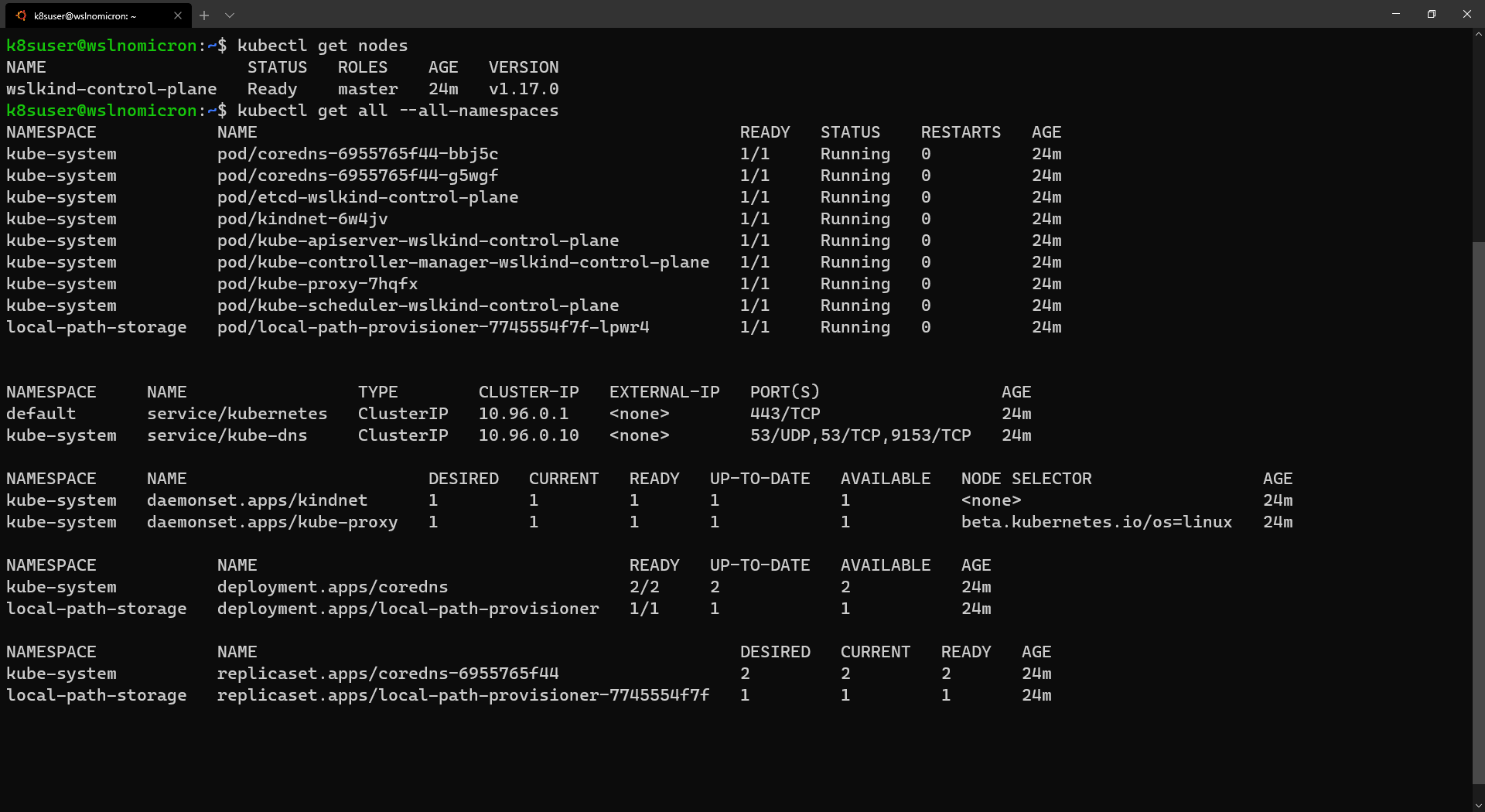 While this will be enough for most people, let's leverage one of the coolest feature, multi-node clustering: 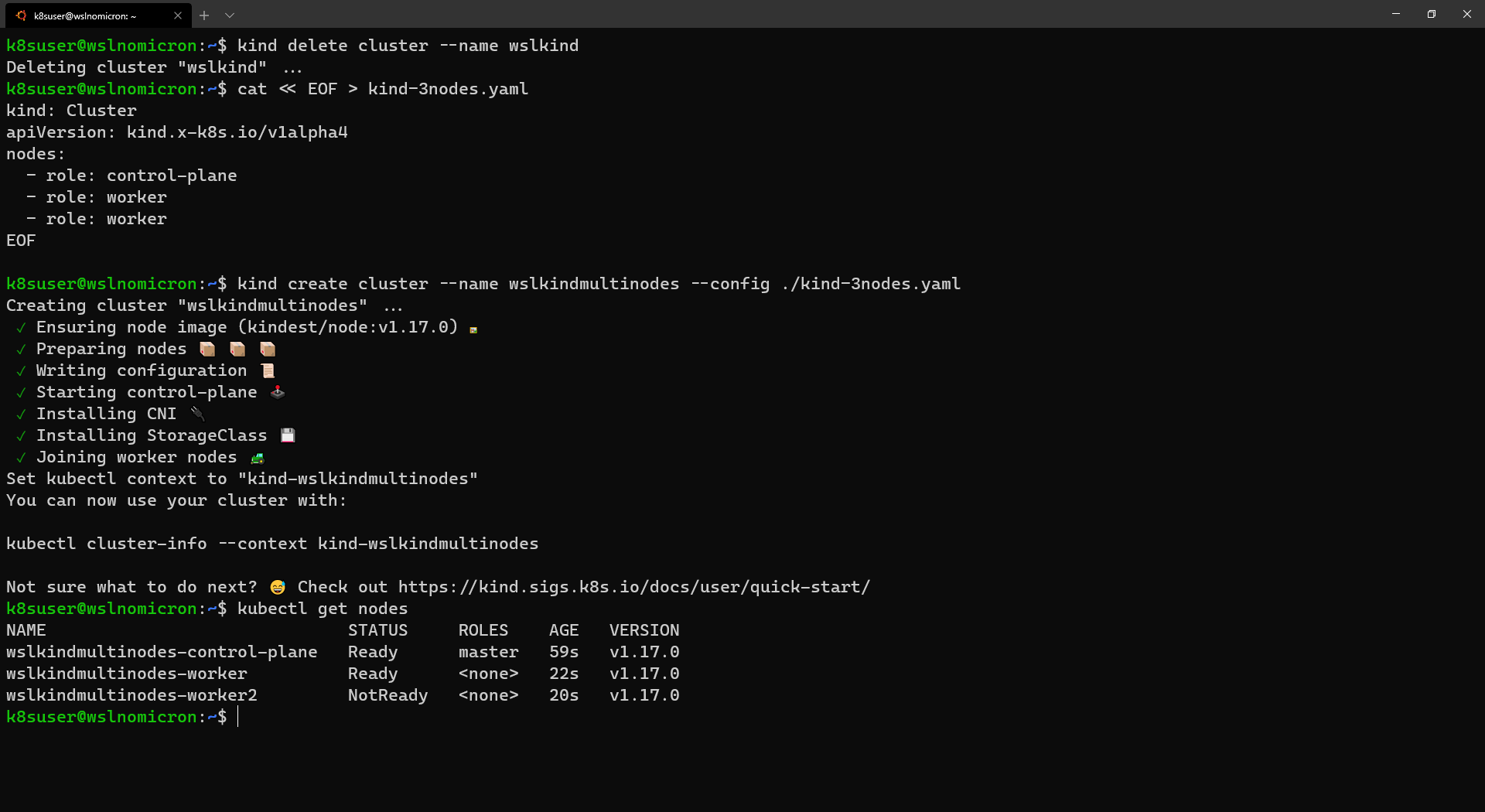 Tip: depending on how fast we run the "get nodes" command, it can be that not all the nodes are ready, wait few seconds and run it again, everything should be ready

And that's it, we have created a three-node cluster, and if we look at the services one more time, we will see several that have now three replicas: 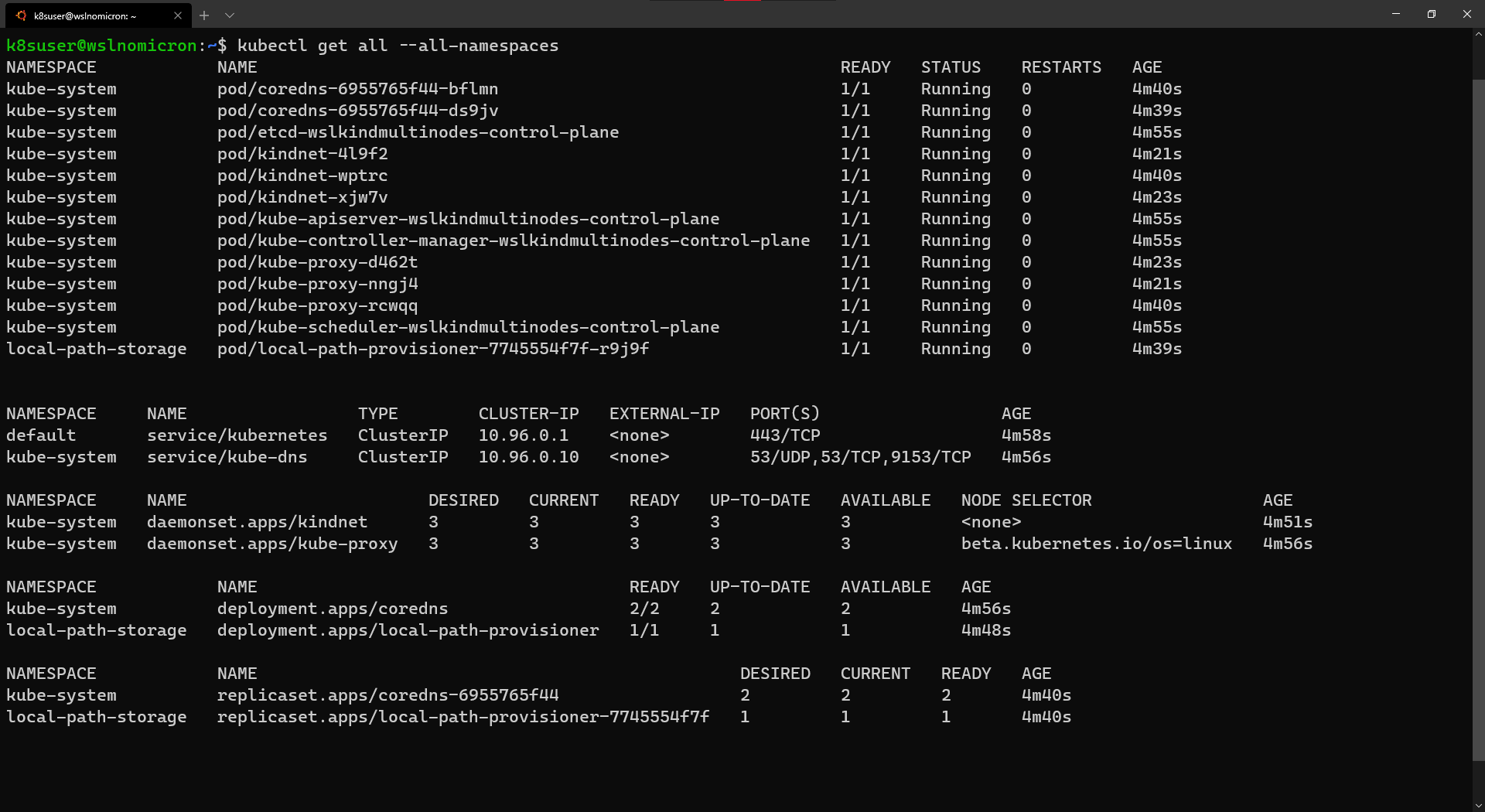 KinD: can I see a nice dashboard?

For that, the Kubernetes Dashboard project has been created. The installation and first connection test is quite fast, so let's do it: 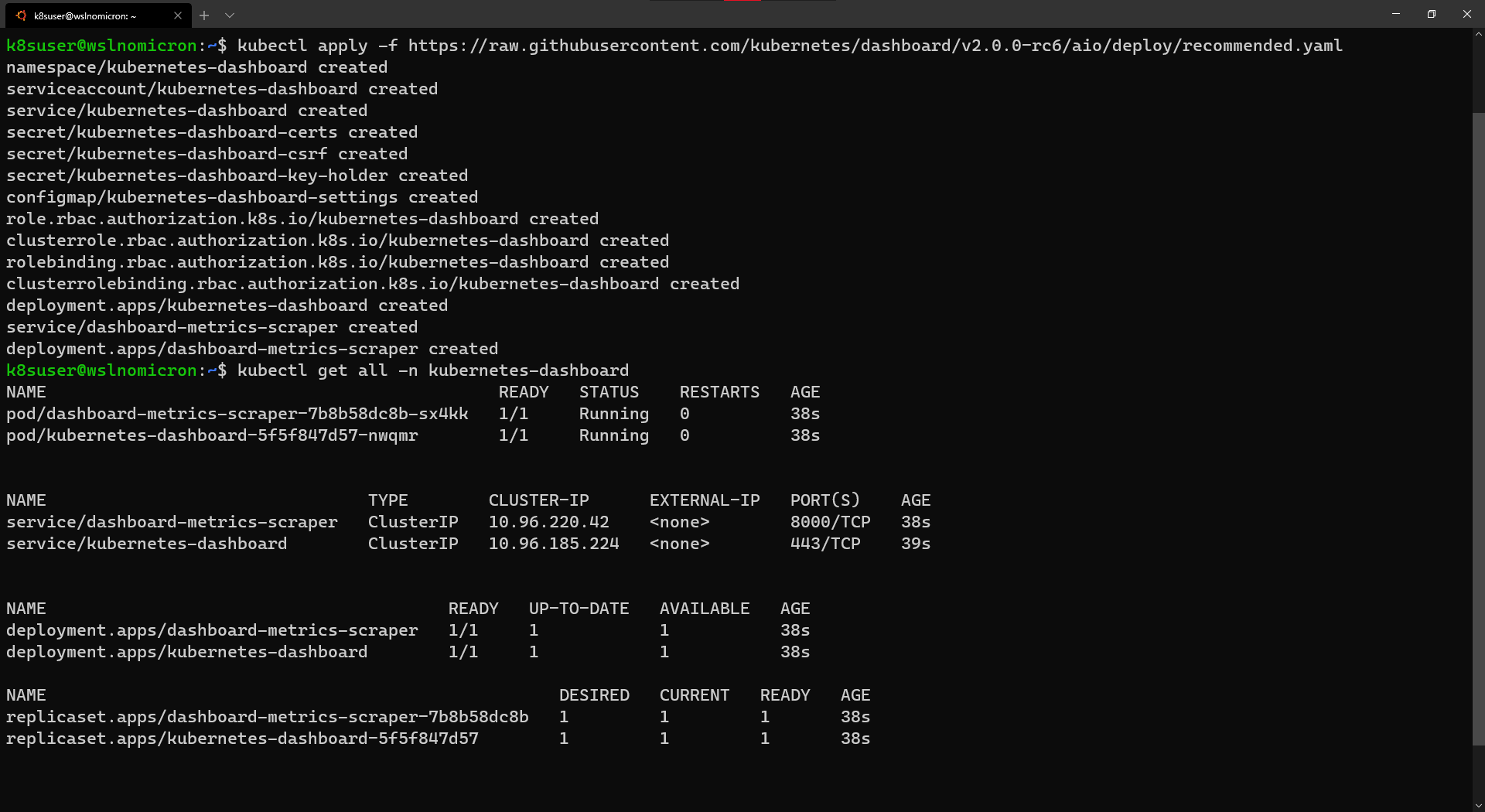 As it created a service with a ClusterIP (read: internal network address), we cannot reach it if we type the URL in our Windows browser: 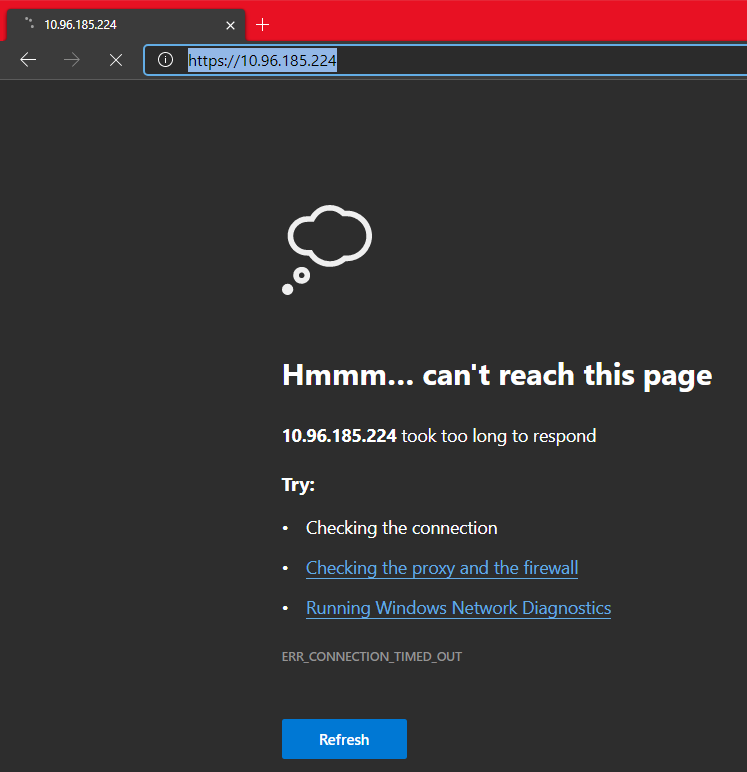 That's because we need to create a temporary proxy: 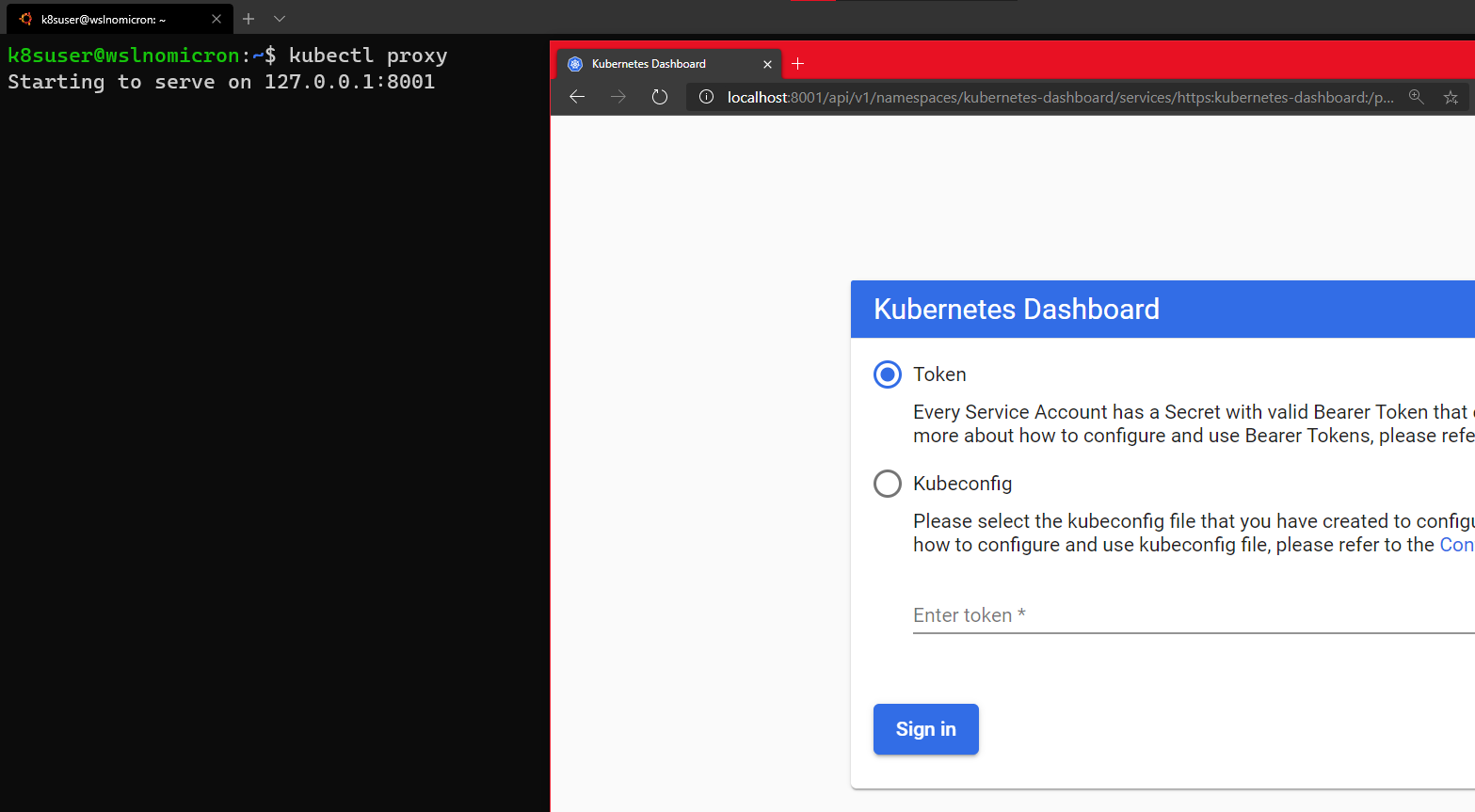 Finally to login, we can either enter a Token, which we didn't create, or enter the kubeconfig file from our Cluster.

If we try to login with the kubeconfig, we will get the error "Internal error (500): Not enough data to create auth info structure". This is due to the lack of credentials in the kubeconfig file.

So to avoid you ending with the same error, let's follow the recommended RBAC approach. 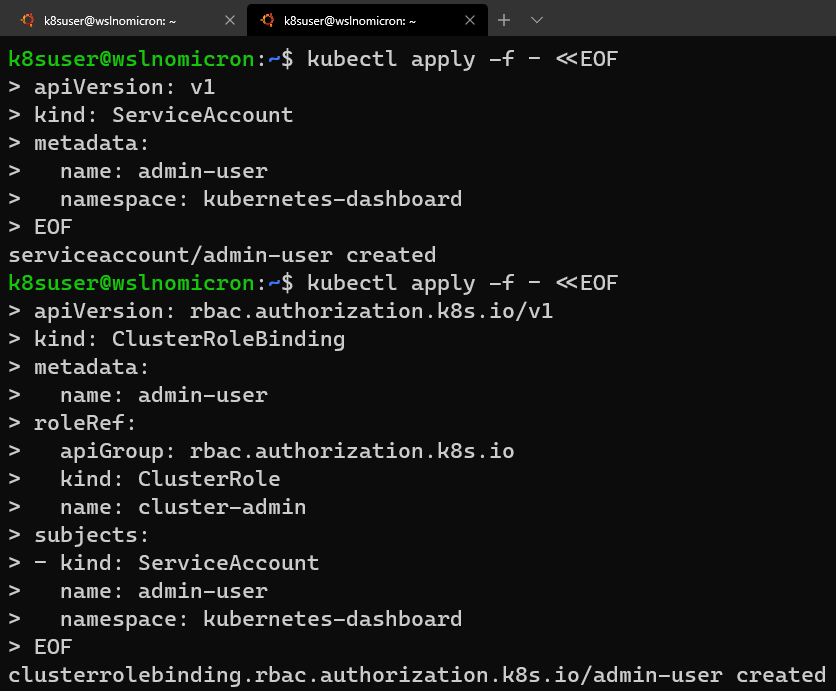 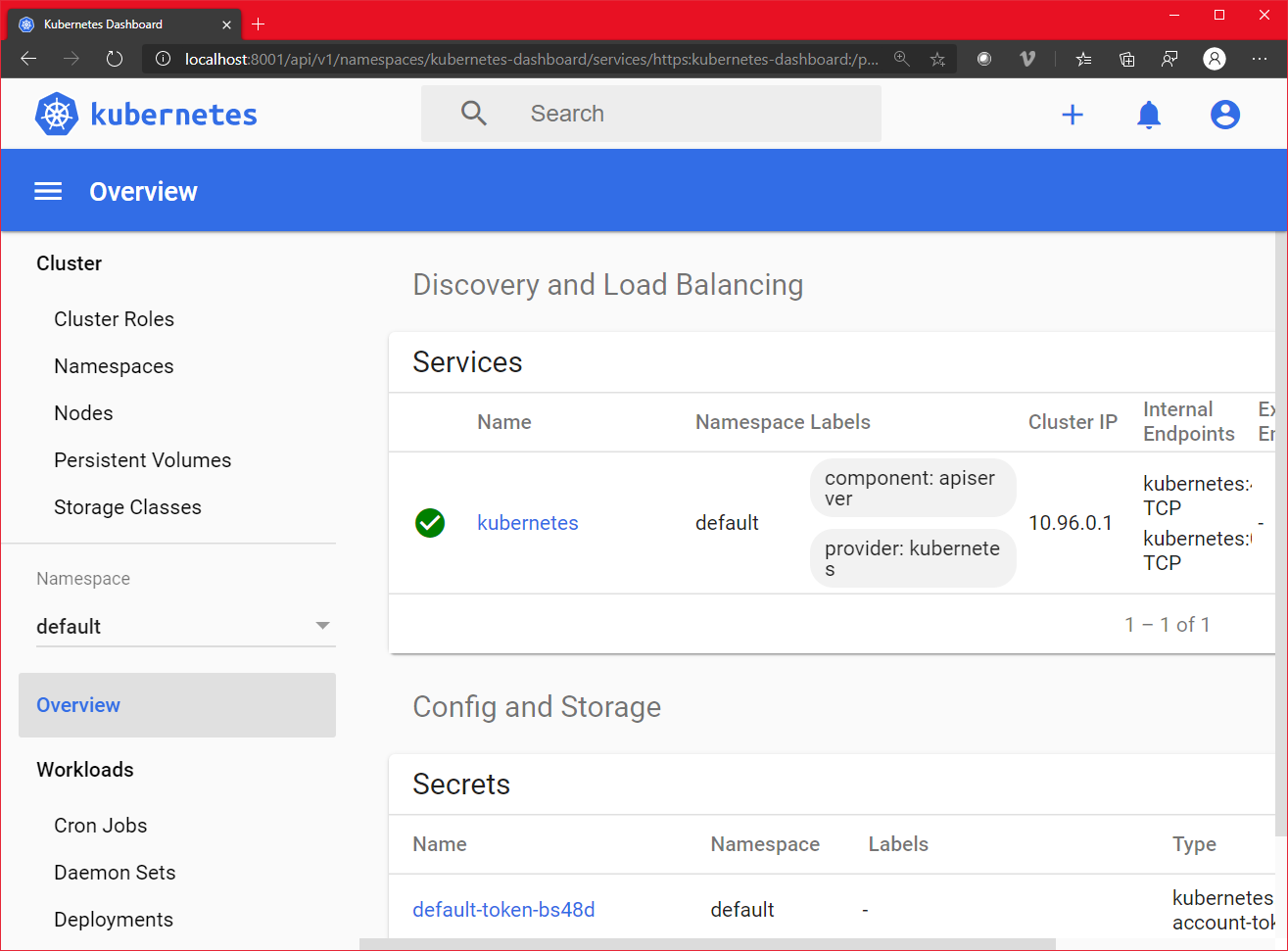 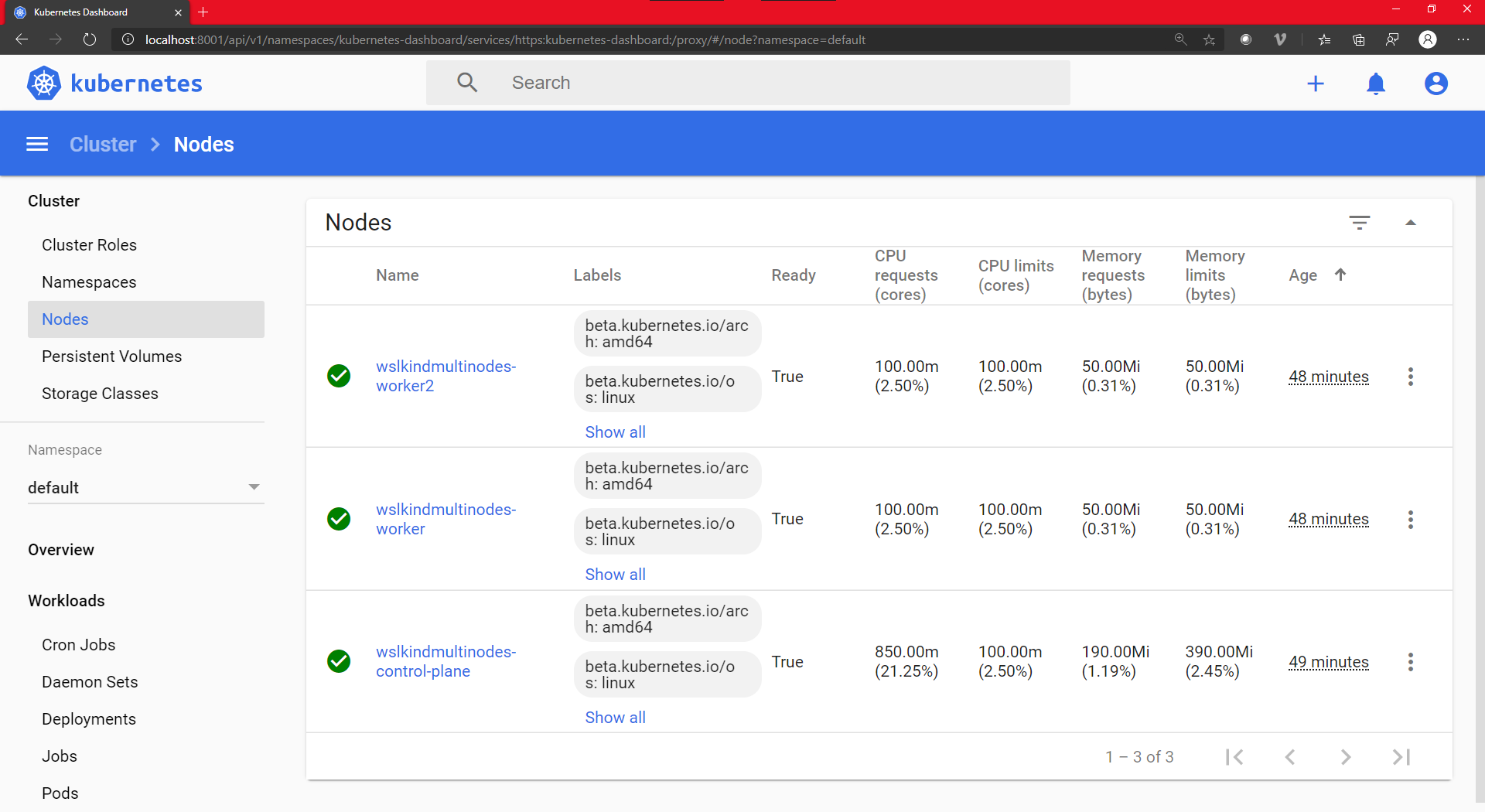 However, if we look carefully at the kubectl command, it found the "Client Version" (1.15.5), but it didn't find any server.

This is normal as we didn't enable the Docker Kubernetes cluster. So let's install Minikube and create our first cluster.

And as sources are always important to mention, we will follow (partially) the how-to from the Kubernetes.io website:

If we follow the how-to, it states that we should use the --driver=none flag in order to run Minikube directly on the host and Docker.

Unfortunately, we will get an error about "conntrack" being required to run Kubernetes v 1.18:

So let's fix the issue by installing the missing package:

Let's try to launch it again:

Ok, this error cloud be problematic ... in the past. Luckily for us, there's a solution

In order to enable SystemD on WSL2, we will apply the scripts from Daniel Llewellyn.

I invite you to read the full blog post and how he came to the solution, and the various iterations he did to fix several issues.

So in a nutshell, here are the commands: 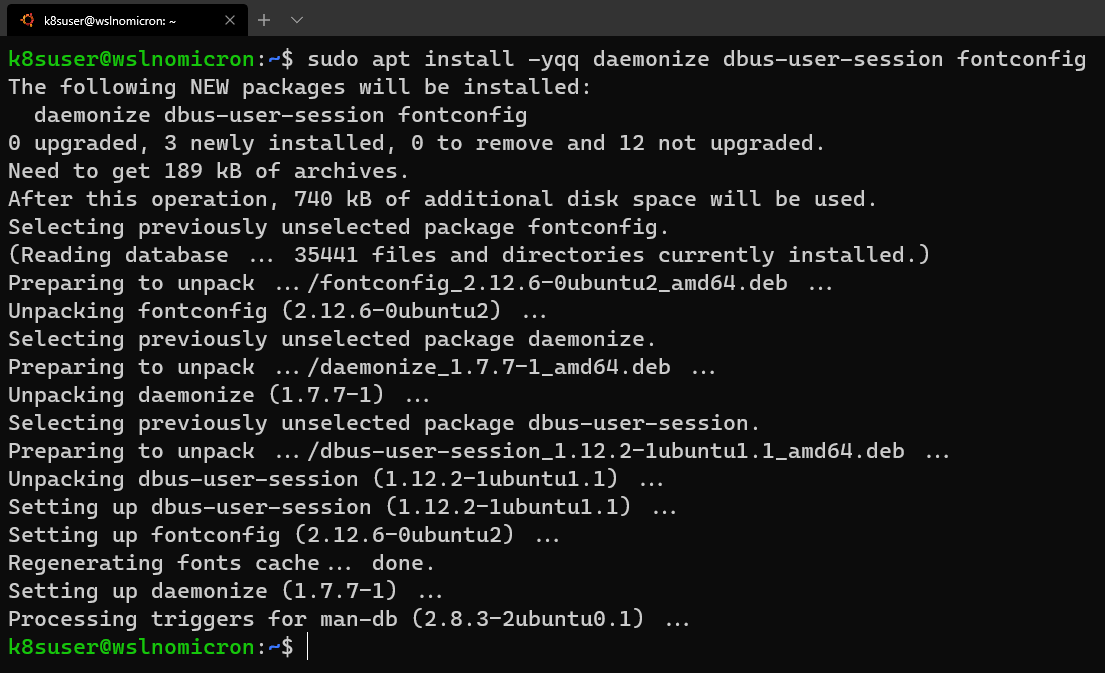 In order to be able to use kubectl with our user, and not sudo, Minikube recommends running the chown command: 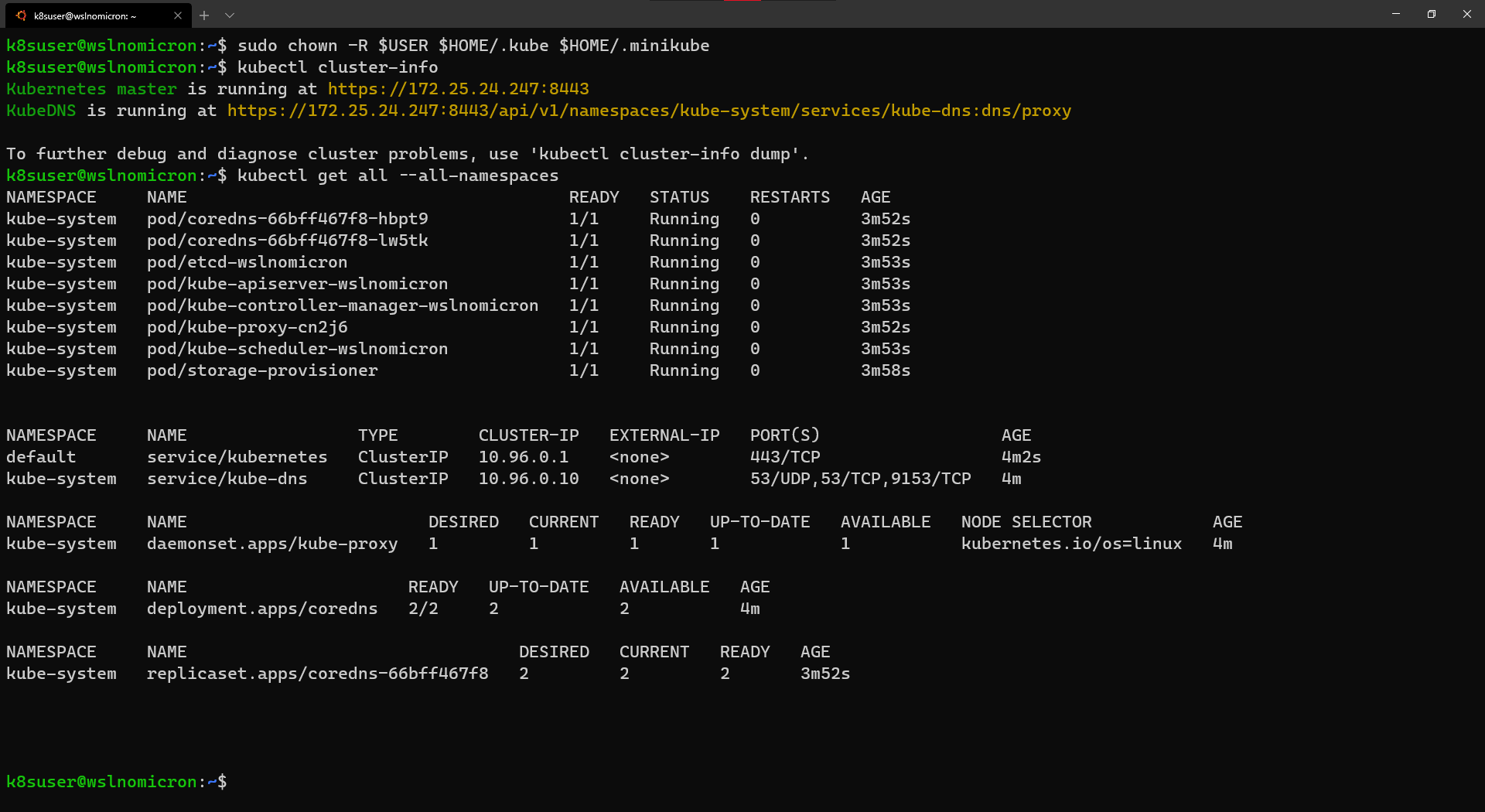 The cluster has been successfully created, and Minikube used the WSL2 IP, which is great for several reasons, and one of them is that we can open the Kubernetes master URL in our Windows browser: 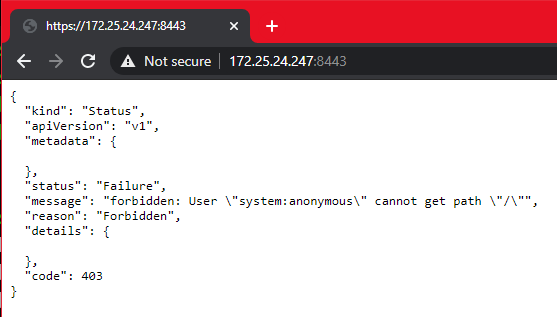 And the real strength of WSL2 integration, the port 8443 once open on WSL2 distro, it actually forwards it to Windows, so instead of the need to remind the IP address, we can also reach the Kubernetes master URL via localhost: 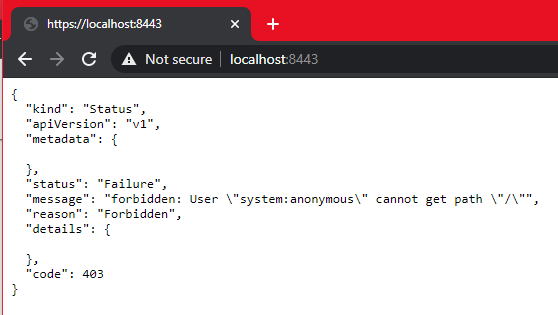 Minikube: can I see a nice dashboard?

For that, Minikube embeded the Kubernetes Dashboard. Thanks to it, running and accessing the Dashboard is very simple: 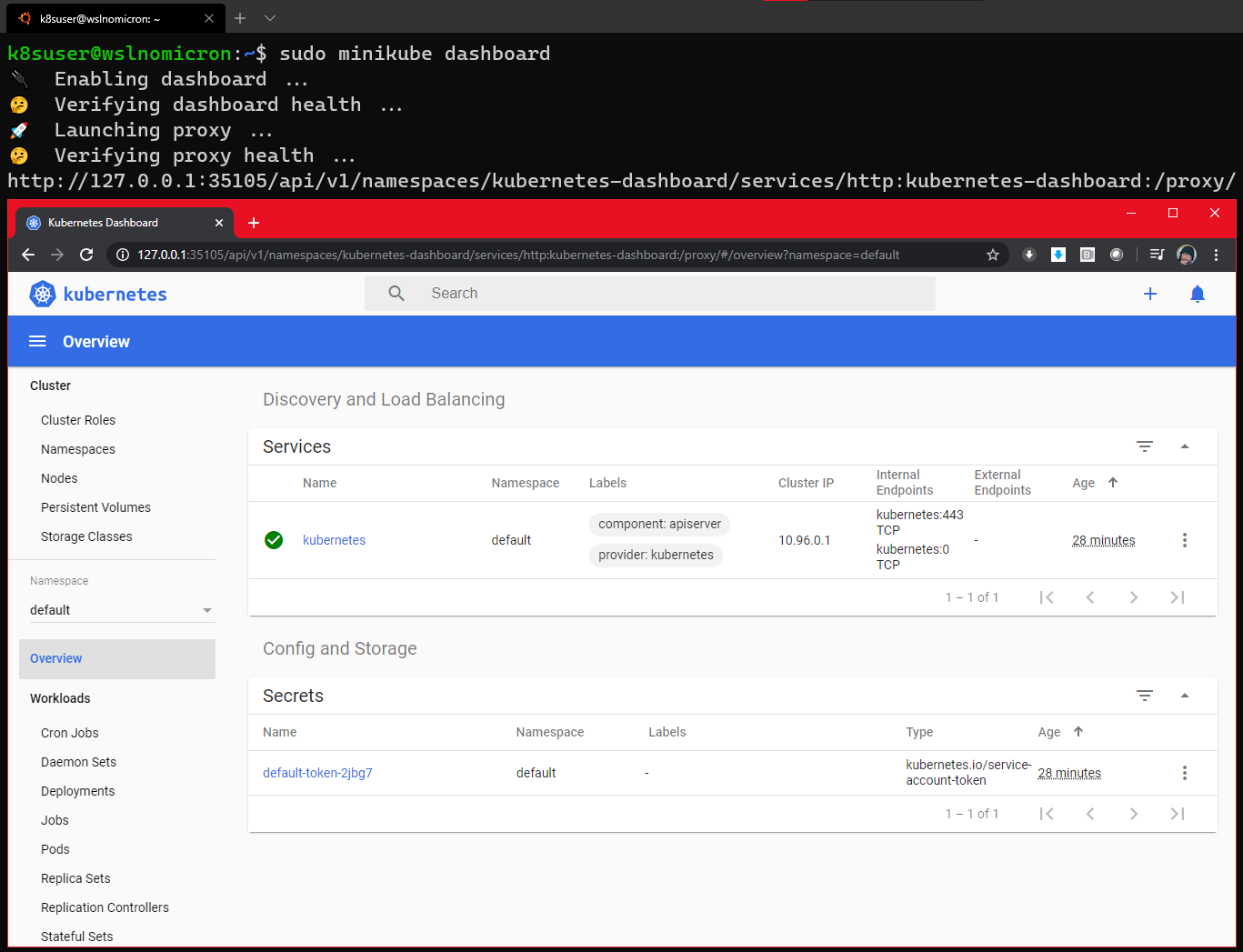 The command creates also a proxy, which means that once we end the command, by pressing CTRL+C, the Dashboard will no more be accessible.

Still, if we look at the namespace kubernetes-dashboard, we will see that the service is still created: 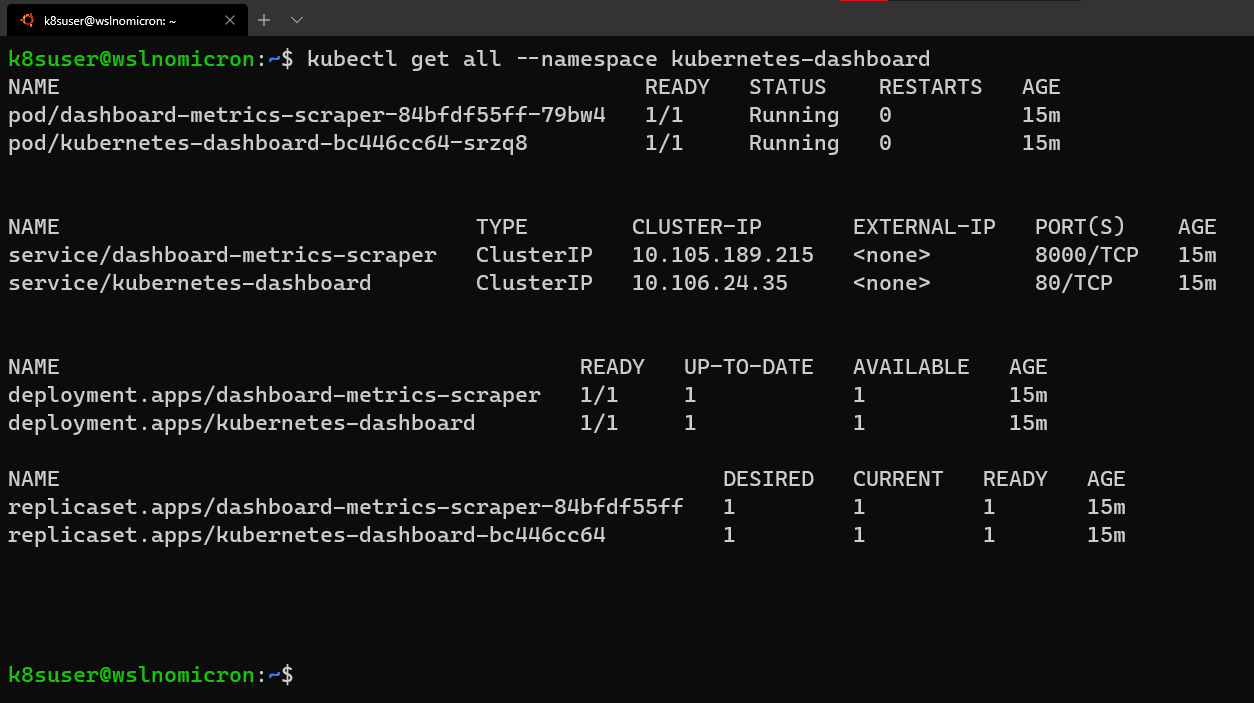 Let's edit the service and change it's type to LoadBalancer: 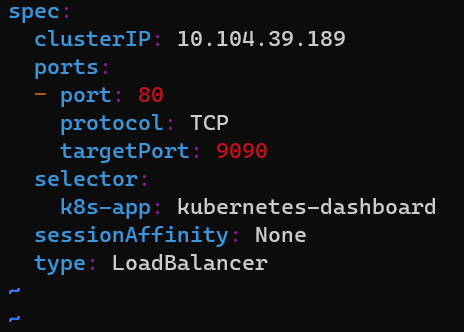 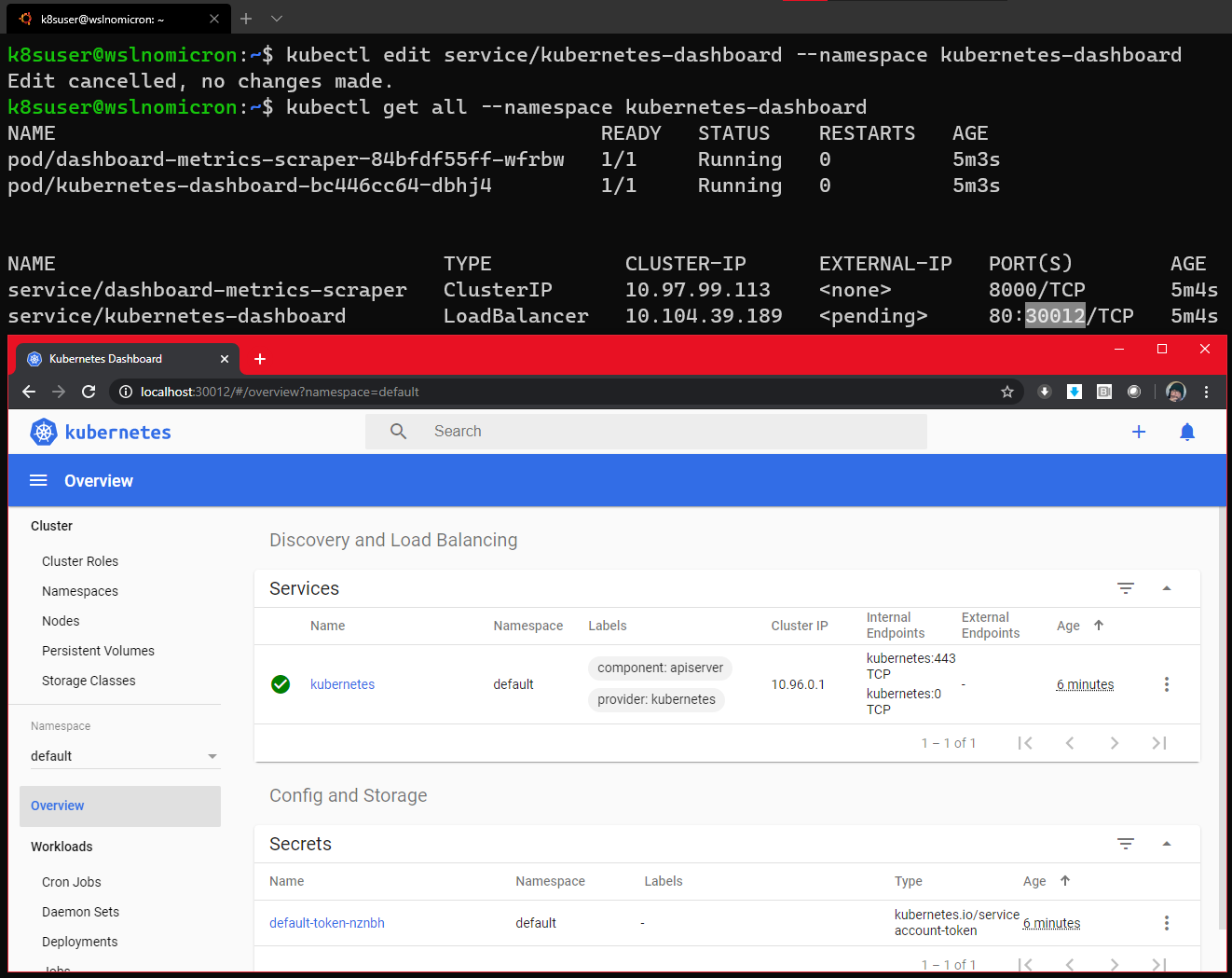 It's clear that we are far from done as we could have some LoadBalancing implemented and/or other services (storage, ingress, registry, etc...).

Concerning Minikube on WSL2, as it needed to enable SystemD, we can consider it as an intermediate level to be implemented.

So with two solutions, what could be the "best for you"? Both bring their own advantages and inconveniences, so here an overview from our point of view solely:

We hope you could have a real taste of the integration between the different components: WSL2 - Docker Desktop - KinD/Minikube. And that gave you some ideas or, even better, some answers to your Kubernetes workflows with KinD and/or Minikube on Windows and WSL2.

See you soon for other adventures in the Kubernetes ocean.