Managing Pods distribution across a cluster is hard. The well-known Kubernetes features for Pod affinity and anti-affinity, allow some control of Pod placement in different topologies. However, these features only resolve part of Pods distribution use cases: either place unlimited Pods to a single topology, or disallow two Pods to co-locate in the same topology. In between these two extreme cases, there is a common need to distribute the Pods evenly across the topologies, so as to achieve better cluster utilization and high availability of applications.

The PodTopologySpread scheduling plugin (originally proposed as EvenPodsSpread) was designed to fill that gap. We promoted it to beta in 1.18.

A new field topologySpreadConstraints is introduced in the Pod's spec API:

As this API is embedded in Pod's spec, you can use this feature in all the high-level workload APIs, such as Deployment, DaemonSet, StatefulSet, etc.

Let's see an example of a cluster to understand this API. 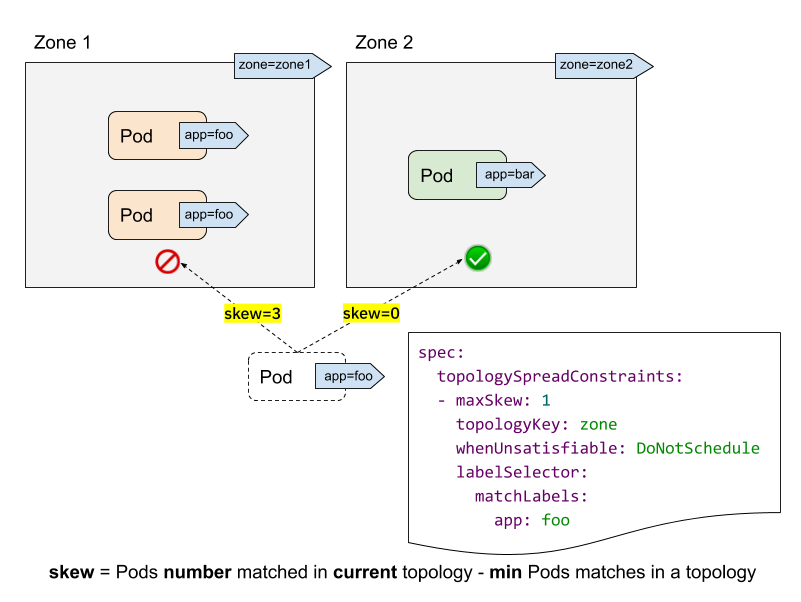 In addition to this basic usage, there are some advanced usage examples that enable your workloads to benefit on high availability and cluster utilization.

Usage along with NodeSelector / NodeAffinity

You may have found that we didn't have a "topologyValues" field to limit which topologies the Pods are going to be scheduled to. By default, it is going to search all Nodes and group them by "topologyKey". Sometimes this may not be the ideal case. For instance, suppose there is a cluster with Nodes tagged with "env=prod", "env=staging" and "env=qa", and now you want to evenly place Pods to the "qa" environment across zones, is it possible?

The answer is yes. You can leverage the NodeSelector or NodeAffinity API spec. Under the hood, the PodTopologySpread feature will honor that and calculate the spread constraints among the nodes that satisfy the selectors. 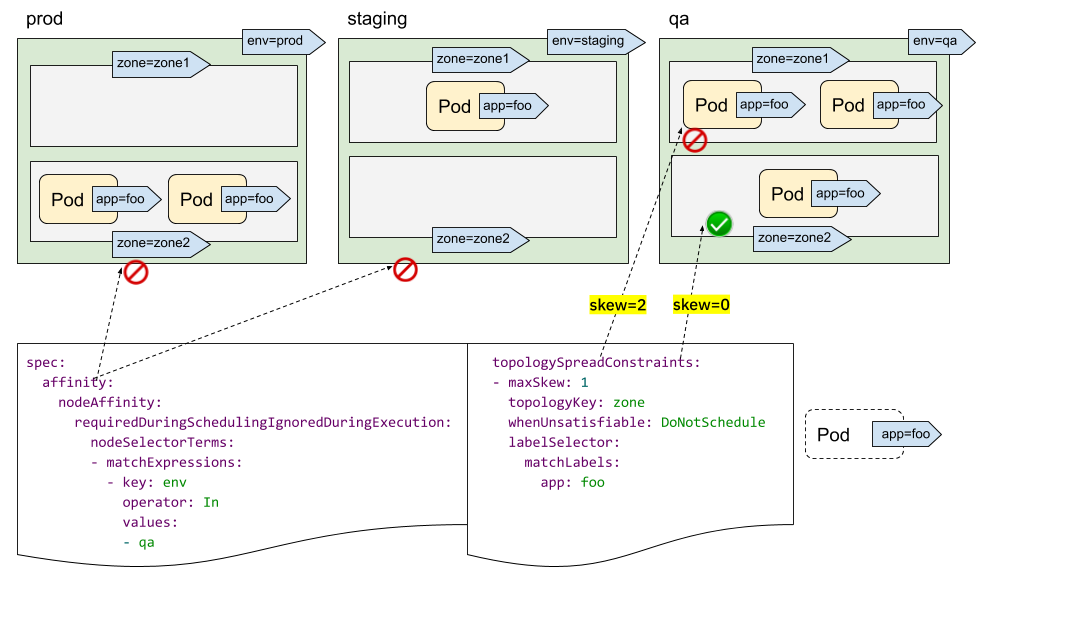 As illustrated above, you can specify spec.affinity.nodeAffinity to limit the "searching scope" to be "qa" environment, and within that scope, the Pod will be scheduled to one zone which satisfies the topologySpreadConstraints. In this case, it's "zone2".

In the following example, we want to schedule a Pod to a cluster with 2 requirements at the same time: 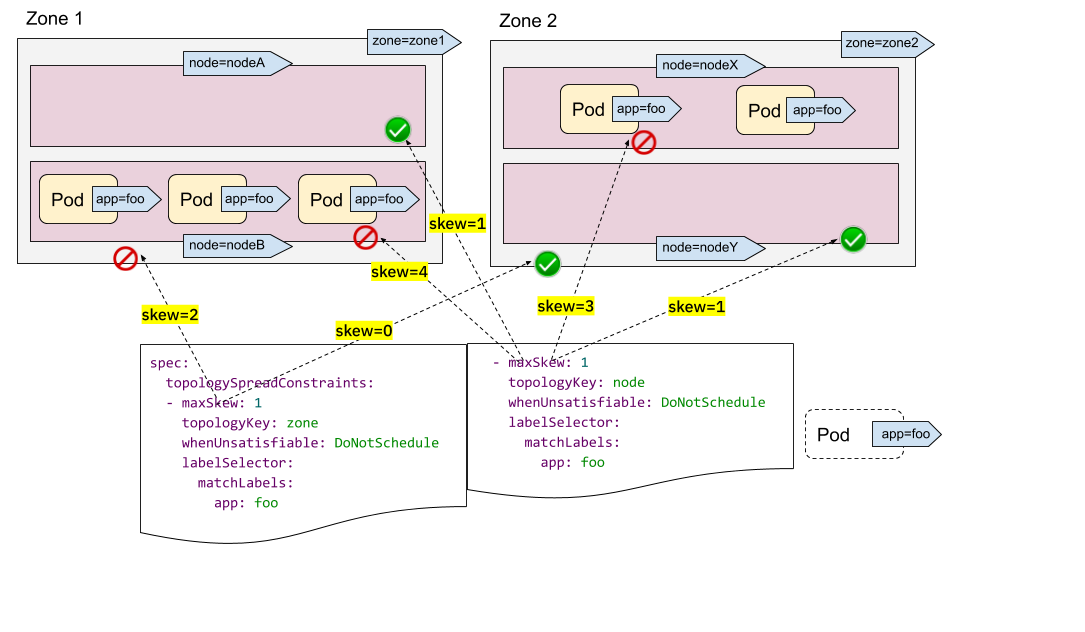 For the first constraint, there are 3 Pods in zone1 and 2 Pods in zone2, so the incoming Pod can be only put to zone2 to satisfy the "maxSkew=1" constraint. In other words, the result set is nodeX and nodeY.

For the second constraint, there are too many Pods in nodeB and nodeX, so the incoming Pod can be only put to nodeA and nodeY.

Note: If two TopologySpreadConstraints are being applied for the same {topologyKey, whenUnsatisfiable} tuple, the Pod creation will be blocked returning a validation error.

PodTopologySpread is a Pod level API. As such, to use the feature, workload authors need to be aware of the underlying topology of the cluster, and then specify proper topologySpreadConstraints in the Pod spec for every workload. While the Pod-level API gives the most flexibility it is also possible to specify cluster-level defaults.

The default PodTopologySpread constraints allow you to specify spreading for all the workloads in the cluster, tailored for its topology. The constraints can be specified by an operator/admin as PodTopologySpread plugin arguments in the scheduling profile configuration API when starting kube-scheduler.

PodTopologySpread allows you to define spreading constraints for your workloads with a flexible and expressive Pod-level API. In the past, workload authors used Pod AntiAffinity rules to force or hint the scheduler to run a single Pod per topology domain. In contrast, the new PodTopologySpread constraints allow Pods to specify skew levels that can be required (hard) or desired (soft). The feature can be paired with Node selectors and Node affinity to limit the spreading to specific domains. Pod spreading constraints can be defined for different topologies such as hostnames, zones, regions, racks, etc.

Lastly, cluster operators can define default constraints to be applied to all Pods. This way, Pods don't need to be aware of the underlying topology of the cluster.