Kubernetes 1.21: Power to the Community

This release cycle, we saw a major shift in ownership of processes around the release team. We moved from a synchronous mode of communication, where we periodically asked the community for inputs, to a mode where the community opts-in to contribute features and/or blogs to the release. These changes have resulted in an increase in collaboration and teamwork across the community. The result of all that is reflected in Kubernetes 1.21 having the most number of features in the recent times.

CronJobs (previously ScheduledJobs) has been a beta feature since Kubernetes 1.8! With 1.21 we get to finally see this widely used API graduate to stable.

CronJobs are meant for performing regular scheduled actions such as backups, report generation, and so on. Each of those tasks should be configured to recur indefinitely (for example: once a day / week / month); you can define the point in time within that interval when the job should start.

By marking Secrets and ConfigMaps as immutable you can be sure your application configuration won't change. If you want to make changes you'll need to create a new, uniquly named Secret or ConfigMap and deploy a new pod to consume that resource. Immutable resources also have scaling benefits because controllers do not need to poll the API server to watch for changes.

This feature has graduated to stable in Kubernetes 1.21.

IP addresses are a consumable resource that cluster operators and administrators need to make sure are not exhausted. In particular, public IPv4 addresses are now scarce. Having dual-stack support enables native IPv6 routing to pods and services, whilst still allowing your cluster to talk IPv4 where needed. Dual-stack cluster networking also improves a possible scaling limitation for workloads.

Dual-stack support in Kubernetes means that pods, services, and nodes can get IPv4 addresses and IPv6 addresses. In Kubernetes 1.21 dual-stack networking has graduated from alpha to beta, and is now enabled by default.

Graceful Node shutdown also graduated to beta with this release (and will now be available to a much larger group of users)! This is a hugely beneficial feature that allows the kubelet to be aware of node shutdown, and gracefully terminate pods that are scheduled to that node.

Currently, when a node shuts down, pods do not follow the expected termination lifecycle and are not shut down gracefully. This can introduce problems with a lot of different workloads. Going forward, the kubelet will be able to detect imminent system shutdown through systemd, then inform running pods so they can terminate as gracefully as possible.

Persistent Volumes (PV) are commonly used in applications to get local, file-based storage. They can be used in many different ways and help users migrate applications without needing to re-write storage backends.

Kubernetes 1.21 has a new alpha feature which allows PVs to be monitored for health of the volume and marked accordingly if the volume becomes unhealthy. Workloads will be able to react to the health state to protect data from being written or read from a volume that is unhealthy.

Previously Kubernetes has maintained multiple build systems. This has often been a source of friction and complexity for new and current contributors.

Over the last release cycle, a lot of work has been put in to simplify the build process, and standardize on the native Golang build tools. This should empower broader community maintenance, and lower the barrier to entry for new contributors.

What's next? We're developing a new built-in mechanism to help limit Pod privileges, with a working title of “PSP Replacement Policy.” Our plan is for this new mechanism to cover the key PodSecurityPolicy use cases, with greatly improved ergonomics and maintainability. To learn more, read PodSecurityPolicy Deprecation: Past, Present, and Future.

You can check out the full details of the 1.21 release in the release notes.

Kubernetes 1.21 is available for download on GitHub. There are some great resources out there for getting started with Kubernetes. You can check out some interactive tutorials on the main Kubernetes site, or run a local cluster on your machine using Docker containers with kind. If you’d like to try building a cluster from scratch, check out the Kubernetes the Hard Way tutorial by Kelsey Hightower.

This release was made possible by a very dedicated group of individuals, who came together as a team in the midst of a lot of things happening out in the world. A huge thank you to the release lead Nabarun Pal, and to everyone else on the release team for supporting each other, and working so hard to deliver the 1.21 release for the community. 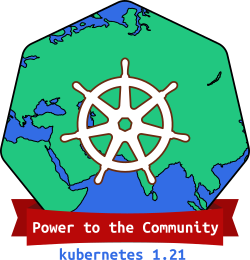 The Kubernetes 1.21 Release Logo portrays the global nature of the Release Team, with release team members residing in timezones from UTC+8 all the way to UTC-8. The diversity of the release team brought in a lot of challenges, but the team tackled them all by adopting more asynchronous communication practices. The heptagonal globe in the release logo signifies the sheer determination of the community to overcome the challenges as they come. It celebrates the amazing teamwork of the release team over the last 3 months to bring in a fun packed Kubernetes release!

The logo is designed by Aravind Sekar, an independent designer based out of India. Aravind helps open source communities like PyCon India in their design efforts.

Join the members of the Kubernetes 1.21 release team on May 13th, 2021 to learn about the major features in this release including IPv4/IPv6 dual-stack support, PersistentVolume Health Monitor, Immutable Secrets and ConfigMaps, and many more. Register here: https://community.cncf.io/events/details/cncf-cncf-online-programs-presents-cncf-live-webinar-kubernetes-121-release/