We’re pleased to announce the release of Kubernetes 1.22, the second release of 2021!

In April of this year, the Kubernetes release cadence was officially changed from four to three releases yearly. This is the first longer-cycle release related to that change. As the Kubernetes project matures, the number of enhancements per cycle grows. This means more work, from version to version, for the contributor community and Release Engineering team, and it can put pressure on the end-user community to stay up-to-date with releases containing increasingly more features.

Changing the release cadence from four to three releases yearly balances many aspects of the project, both in how contributions and releases are managed, and also in the community's ability to plan for upgrades and stay up to date.

You can read more in the official blog post Kubernetes Release Cadence Change: Here’s What You Need To Know.

Support for Kubernetes client credential plugins has been in beta since 1.11, and with the release of Kubernetes 1.22 now graduates to stable. The GA feature set includes improved support for plugins that provide interactive login flows, as well as a number of bug fixes. Aspiring plugin authors can look at sample-exec-plugin to get started.

Kubernetes' default backend storage, etcd, has a new release: 3.5.0. The new release comes with improvements to the security, performance, monitoring, and developer experience. There are numerous bug fixes and some critical new features like the migration to structured logging and built-in log rotation. The release comes with a detailed future roadmap to implement a solution to traffic overload. You can read a full and detailed list of changes in the 3.5.0 release announcement.

Quality of Service for memory resources

Originally, Kubernetes used the v1 cgroups API. With that design, the QoS class for a Pod only applied to CPU resources (such as cpu_shares). As an alpha feature, Kubernetes v1.22 can now use the cgroups v2 API to control memory allocation and isolation. This feature is designed to improve workload and node availability when there is contention for memory resources, and to improve the predictability of container lifecycle.

Every system administrator or Kubernetes user has been in the same boat regarding setting up and using Kubernetes: disable swap space. With the release of Kubernetes 1.22, alpha support is available to run nodes with swap memory. This change lets administrators opt in to configuring swap on Linux nodes, treating a portion of block storage as additional virtual memory.

Continuing to support the growing developer community, SIG Windows has released their Development Environment. These new tools support multiple CNI providers and can run on multiple platforms. There is also a new way to run bleeding-edge Windows features from scratch by compiling the Windows kubelet and kube-proxy, then using them along with daily builds of other Kubernetes components.

CSI support for Windows nodes moves to GA in the 1.22 release. In Kubernetes v1.22, Windows privileged containers are an alpha feature. To allow using CSI storage on Windows nodes, CSIProxy enables CSI node plugins to be deployed as unprivileged pods, using the proxy to perform privileged storage operations on the node.

An alpha feature for default seccomp profiles has been added to the kubelet, along with a new command line flag and configuration. When in use, this new feature provides cluster-wide seccomp defaults, using the RuntimeDefault seccomp profile rather than Unconfined by default. This enhances the default security of the Kubernetes Deployment. Security administrators will now sleep better knowing that workloads are more secure by default. To learn more about the feature, please refer to the official seccomp tutorial.

A new alpha feature allows running the kubeadm control plane components as non-root users. This is a long requested security measure in kubeadm. To try it you must enable the kubeadm specific RootlessControlPlane feature gate. When you deploy a cluster using this alpha feature, your control plane runs with lower privileges.

For kubeadm, Kubernetes 1.22 also brings a new v1beta3 configuration API. This iteration adds some long requested features and deprecates some existing ones. The v1beta3 version is now the preferred API version; the v1beta2 API also remains available and is not yet deprecated.

A number of deprecated beta APIs have been removed in 1.22 in favor of the GA version of those same APIs. All existing objects can be interacted with via stable APIs. This removal includes beta versions of the Ingress, IngressClass, Lease, APIService, ValidatingWebhookConfiguration, MutatingWebhookConfiguration, CustomResourceDefinition, TokenReview, SubjectAccessReview, and CertificateSigningRequest APIs.

For the full list, check out the Deprecated API Migration Guide as well as the blog post Kubernetes API and Feature Removals In 1.22: Here’s What You Need To Know.

For stable features, the kubectl tool follows the Kubernetes version skew policy; however, kubectl v1.21 and older do not support the new API for ephemeral containers. If you plan to use kubectl debug to create ephemeral containers, and your cluster is running Kubernetes v1.22, you cannot do so with kubectl v1.21 or earlier. Please update kubectl to 1.22 if you wish to use kubectl debug with a mix of cluster versions.

You can check out the full details of the 1.22 release in the release notes.

Kubernetes 1.22 is available for download and also on the GitHub project.

There are some great resources out there for getting started with Kubernetes. You can check out some interactive tutorials on the main Kubernetes site, or run a local cluster on your machine using Docker containers with kind. If you’d like to try building a cluster from scratch, check out the Kubernetes the Hard Way tutorial by Kelsey Hightower.

This release was made possible by a very dedicated group of individuals, who came together as a team to deliver technical content, documentation, code, and a host of other components that go into every Kubernetes release.

A huge thank you to the release lead Savitha Raghunathan for leading us through a successful release cycle, and to everyone else on the release team for supporting each other, and working so hard to deliver the 1.22 release for the community.

We would also like to take this opportunity to remember Peeyush Gupta, a member of our team that we lost earlier this year. Peeyush was actively involved in SIG ContribEx and the Kubernetes Release Team, most recently serving as the 1.22 Communications lead. His contributions and efforts will continue to reflect in the community he helped build. A CNCF memorial page has been created where thoughts and memories can be shared by the community. 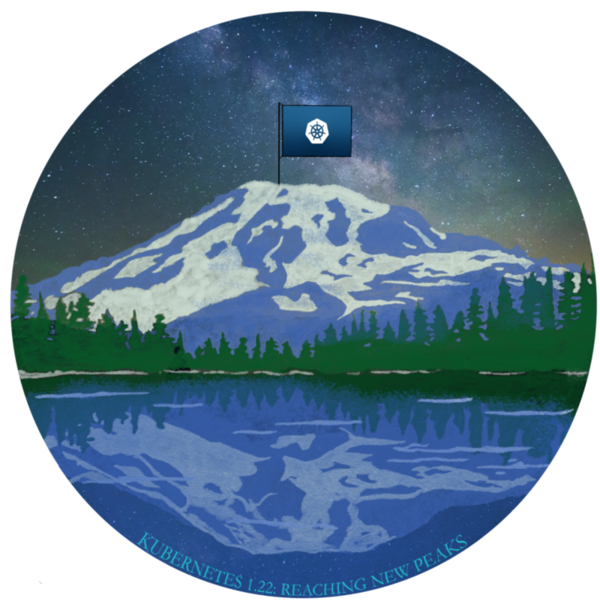 Amidst the ongoing pandemic, natural disasters, and ever-present shadow of burnout, the 1.22 release of Kubernetes includes 53 enhancements. This makes it the largest release to date. This accomplishment was only made possible due to the hard-working and passionate Release Team members and the amazing contributors of the Kubernetes ecosystem. The release logo is our reminder to keep reaching for new milestones and setting new records. And it is dedicated to all the Release Team members, hikers, and stargazers!

The logo is designed by Boris Zotkin. Boris is a Mac/Linux Administrator at the MathWorks. He enjoys simple things in life and loves spending time with his family. This tech-savvy individual is always up for a challenge and happy to help a friend!

The CNCF K8s DevStats project aggregates a number of interesting data points related to the velocity of Kubernetes and various sub-projects. This includes everything from individual contributions to the number of companies that are contributing, and is an illustration of the depth and breadth of effort that goes into evolving this ecosystem.

Join members of the Kubernetes 1.22 release team on October 5, 2021 to learn about the major features of this release, as well as deprecations and removals to help plan for upgrades. For more information and registration, visit the event page on the CNCF Online Programs site.