This page assumes that you understand how to contribute to new content and review others' work, and are ready to learn about more ways to contribute. You need to use the Git command line client and other tools for some of these tasks.

After you've been contributing to the Kubernetes documentation for a while, you may have ideas for improving the Style Guide , the Content Guide, the toolchain used to build the documentation, the website style, the processes for reviewing and merging pull requests, or other aspects of the documentation. For maximum transparency, these types of proposals need to be discussed in a SIG Docs meeting or on the kubernetes-sig-docs mailing list. In addition, it can help to have some context about the way things currently work and why past decisions have been made before proposing sweeping changes. The quickest way to get answers to questions about how the documentation currently works is to ask in the #sig-docs Slack channel on kubernetes.slack.com

After the discussion has taken place and the SIG is in agreement about the desired outcome, you can work on the proposed changes in the way that is the most appropriate. For instance, an update to the style guide or the website's functionality might involve opening a pull request, while a change related to documentation testing might involve working with sig-testing.

Coordinate docs for a Kubernetes release

SIG Docs approvers can coordinate docs for a Kubernetes release.

Each Kubernetes release is coordinated by a team of people participating in the sig-release Special Interest Group (SIG). Others on the release team for a given release include an overall release lead, as well as representatives from sig-testing and others. To find out more about Kubernetes release processes, refer to https://github.com/kubernetes/sig-release.

The SIG Docs representative for a given release coordinates the following tasks:

Coordinating a release is typically a 3-4 month commitment, and the duty is rotated among SIG Docs approvers.

Serve as a New Contributor Ambassador

Responsibilities for New Contributor Ambassadors include:

Current New Contributor Ambassadors are announced at each SIG-Docs meeting and in the Kubernetes #sig-docs channel.

After a new contributor has successfully submitted 5 substantive pull requests to one or more Kubernetes repositories, they are eligible to apply for membership in the Kubernetes organization. The contributor's membership needs to be backed by two sponsors who are already reviewers.

New docs contributors can request sponsors by asking in the #sig-docs channel on the Kubernetes Slack instance or on the SIG Docs mailing list. If you feel confident about the applicant's work, you volunteer to sponsor them. When they submit their membership application, reply to the application with a "+1" and include details about why you think the applicant is a good fit for membership in the Kubernetes organization.

Serve as a SIG Co-chair

SIG Docs members can serve a term as a co-chair of SIG Docs.

A Kubernetes member must meet the following requirements to be a co-chair:

The role of co-chair is one of service: co-chairs build contributor capacity, handle process and policy, schedule and run meetings, schedule PR wranglers, advocate for docs in the Kubernetes community, make sure that docs succeed in Kubernetes release cycles, and keep SIG Docs focused on effective priorities.

To schedule and run effective meetings, these guidelines show what to do, how to do it, and why.

Uphold the community code of conduct:

For weekly meetings, copypaste the previous week's notes into the "Past meetings" section of the notes

Begin and end meetings on time. 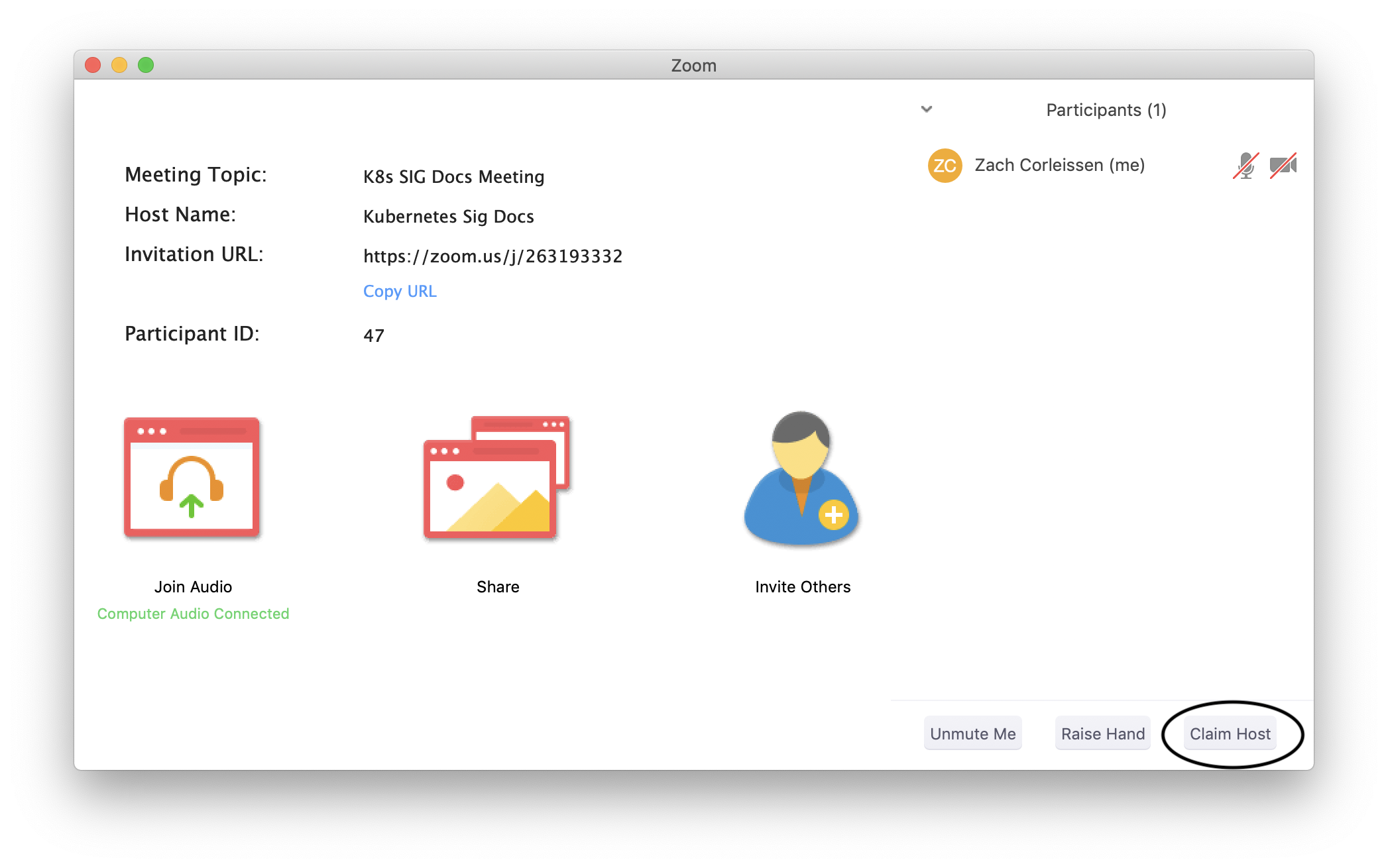 When you're ready to start the recording, click Record to Cloud.