Creating a cluster with kubeadm 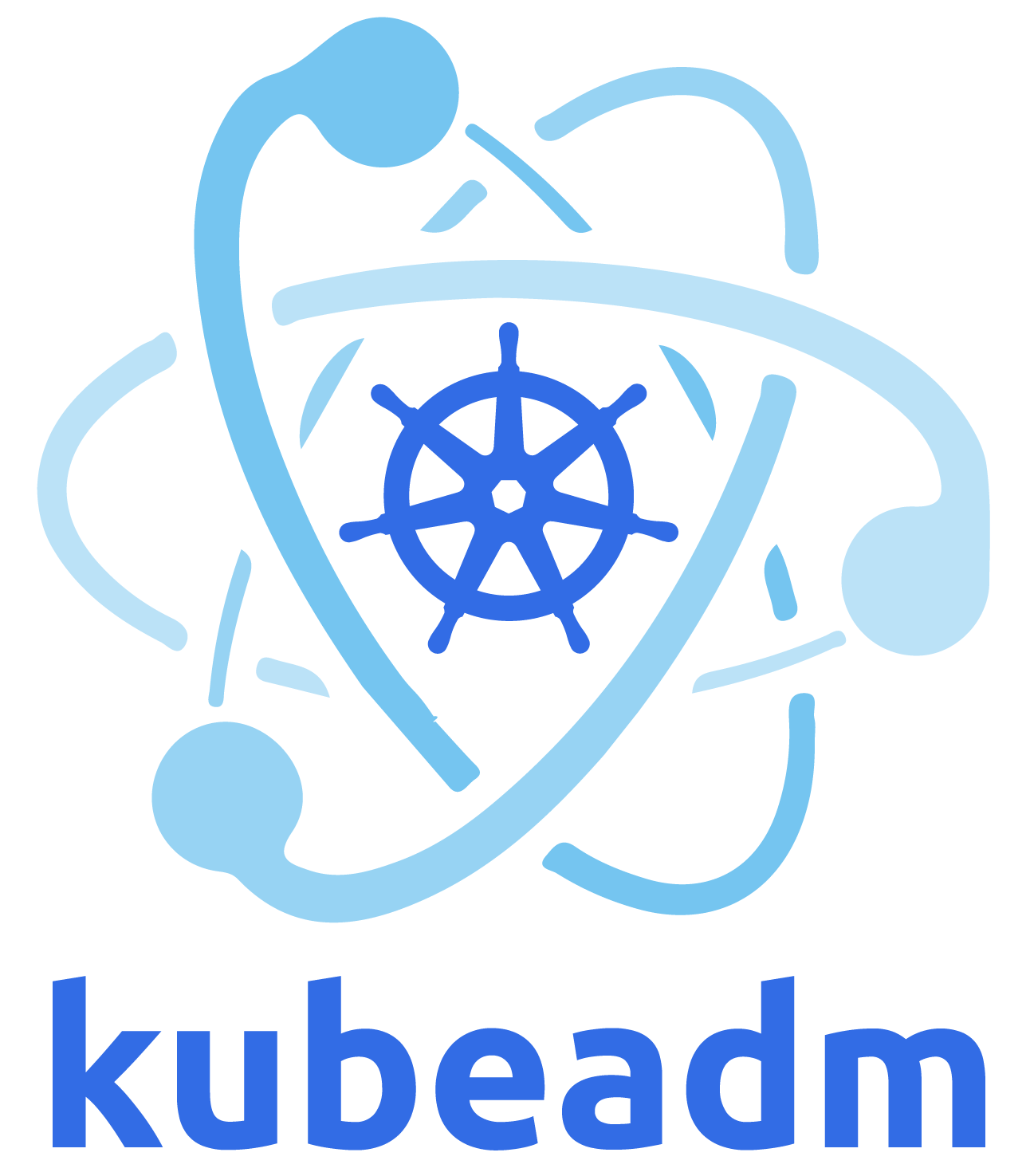 Using kubeadm, you can create a minimum viable Kubernetes cluster that conforms to best practices. In fact, you can use kubeadm to set up a cluster that will pass the Kubernetes Conformance tests. kubeadm also supports other cluster lifecycle functions, such as bootstrap tokens and cluster upgrades.

The kubeadm tool is good if you need:

You can install and use kubeadm on various machines: your laptop, a set of cloud servers, a Raspberry Pi, and more. Whether you're deploying into the cloud or on-premises, you can integrate kubeadm into provisioning systems such as Ansible or Terraform.

You also need to use a version of kubeadm that can deploy the version of Kubernetes that you want to use in your new cluster.

Kubernetes' version and version skew support policy applies to kubeadm as well as to Kubernetes overall. Check that policy to learn about what versions of Kubernetes and kubeadm are supported. This page is written for Kubernetes v1.26.

The kubeadm tool's overall feature state is General Availability (GA). Some sub-features are still under active development. The implementation of creating the cluster may change slightly as the tool evolves, but the overall implementation should be pretty stable.

Note: Any commands under kubeadm alpha are, by definition, supported on an alpha level.

Install a container runtime and kubeadm on all the hosts. For detailed instructions and other prerequisites, see Installing kubeadm.

If you have already installed kubeadm, run apt-get update && apt-get upgrade or yum update to get the latest version of kubeadm.

When you upgrade, the kubelet restarts every few seconds as it waits in a crashloop for kubeadm to tell it what to do. This crashloop is expected and normal. After you initialize your control-plane, the kubelet runs normally.

This step is optional and only applies in case you wish kubeadm init and kubeadm join to not download the default container images which are hosted at registry.k8s.io.

Kubeadm allows you to use a custom image repository for the required images. See Using custom images for more details.

The control-plane node is the machine where the control plane components run, including etcd (the cluster database) and the API Server (which the kubectl command line tool communicates with).

To initialize the control-plane node run:

--control-plane-endpoint allows both IP addresses and DNS names that can map to IP addresses. Please contact your network administrator to evaluate possible solutions with respect to such mapping.

Here is an example mapping:

Turning a single control plane cluster created without --control-plane-endpoint into a highly available cluster is not supported by kubeadm.

To reconfigure a cluster that has already been created see Reconfiguring a kubeadm cluster.

To run kubeadm init again, you must first tear down the cluster.

If you join a node with a different architecture to your cluster, make sure that your deployed DaemonSets have container image support for this architecture.

kubeadm init first runs a series of prechecks to ensure that the machine is ready to run Kubernetes. These prechecks expose warnings and exit on errors. kubeadm init then downloads and installs the cluster control plane components. This may take several minutes. After it finishes you should see:

To make kubectl work for your non-root user, run these commands, which are also part of the kubeadm init output:

Alternatively, if you are the root user, you can run:

Warning: Kubeadm signs the certificate in the admin.conf to have Subject: O = system:masters, CN = kubernetes-admin. system:masters is a break-glass, super user group that bypasses the authorization layer (e.g. RBAC). Do not share the admin.conf file with anyone and instead grant users custom permissions by generating them a kubeconfig file using the kubeadm kubeconfig user command. For more details see Generating kubeconfig files for additional users.

Make a record of the kubeadm join command that kubeadm init outputs. You need this command to join nodes to your cluster.

The token is used for mutual authentication between the control-plane node and the joining nodes. The token included here is secret. Keep it safe, because anyone with this token can add authenticated nodes to your cluster. These tokens can be listed, created, and deleted with the kubeadm token command. See the kubeadm reference guide.

This section contains important information about networking setup and deployment order. Read all of this advice carefully before proceeding.

You must deploy a Container Network Interface (CNI) based Pod network add-on so that your Pods can communicate with each other. Cluster DNS (CoreDNS) will not start up before a network is installed.

Note: Kubeadm should be CNI agnostic and the validation of CNI providers is out of the scope of our current e2e testing. If you find an issue related to a CNI plugin you should log a ticket in its respective issue tracker instead of the kubeadm or kubernetes issue trackers.

See a list of add-ons that implement the Kubernetes networking model.

You can install a Pod network add-on with the following command on the control-plane node or a node that has the kubeconfig credentials:

You can install only one Pod network per cluster.

If your network is not working or CoreDNS is not in the Running state, check out the troubleshooting guide for kubeadm.

By default, kubeadm enables the NodeRestriction admission controller that restricts what labels can be self-applied by kubelets on node registration. The admission controller documentation covers what labels are permitted to be used with the kubelet --node-labels option. The node-role.kubernetes.io/control-plane label is such a restricted label and kubeadm manually applies it using a privileged client after a node has been created. To do that manually you can do the same by using kubectl label and ensure it is using a privileged kubeconfig such as the kubeadm managed /etc/kubernetes/admin.conf.

This will remove the node-role.kubernetes.io/control-plane:NoSchedule taint from any nodes that have it, including the control plane nodes, meaning that the scheduler will then be able to schedule Pods everywhere.

The nodes are where your workloads (containers and Pods, etc) run. To add new nodes to your cluster do the following for each machine:

If you do not have the token, you can get it by running the following command on the control-plane node:

By default, tokens expire after 24 hours. If you are joining a node to the cluster after the current token has expired, you can create a new token by running the following command on the control-plane node:

If you don't have the value of --discovery-token-ca-cert-hash, you can get it by running the following command chain on the control-plane node:

The output is similar to:

A few seconds later, you should notice this node in the output from kubectl get nodes when run on the control-plane node.

Note: As the cluster nodes are usually initialized sequentially, the CoreDNS Pods are likely to all run on the first control-plane node. To provide higher availability, please rebalance the CoreDNS Pods with kubectl -n kube-system rollout restart deployment coredns after at least one new node is joined.

In order to get a kubectl on some other computer (e.g. laptop) to talk to your cluster, you need to copy the administrator kubeconfig file from your control-plane node to your workstation like this:

The example above assumes SSH access is enabled for root. If that is not the case, you can copy the admin.conf file to be accessible by some other user and scp using that other user instead.

The admin.conf file gives the user superuser privileges over the cluster. This file should be used sparingly. For normal users, it's recommended to generate an unique credential to which you grant privileges. You can do this with the kubeadm alpha kubeconfig user --client-name <CN> command. That command will print out a KubeConfig file to STDOUT which you should save to a file and distribute to your user. After that, grant privileges by using kubectl create (cluster)rolebinding.

If you want to connect to the API Server from outside the cluster you can use kubectl proxy:

You can now access the API Server locally at http://localhost:8001/api/v1

If you used disposable servers for your cluster, for testing, you can switch those off and do no further clean up. You can use kubectl config delete-cluster to delete your local references to the cluster.

However, if you want to deprovision your cluster more cleanly, you should first drain the node and make sure that the node is empty, then deconfigure the node.

Talking to the control-plane node with the appropriate credentials, run:

Before removing the node, reset the state installed by kubeadm:

The reset process does not reset or clean up iptables rules or IPVS tables. If you wish to reset iptables, you must do so manually:

If you want to reset the IPVS tables, you must run the following command:

If you wish to start over, run kubeadm init or kubeadm join with the appropriate arguments.

Clean up the control plane

You can use kubeadm reset on the control plane host to trigger a best-effort clean up.

See the kubeadm reset reference documentation for more information about this subcommand and its options.

While kubeadm allows version skew against some components that it manages, it is recommended that you match the kubeadm version with the versions of the control plane components, kube-proxy and kubelet.

kubeadm's skew against the Kubernetes version

kubeadm can be used with Kubernetes components that are the same version as kubeadm or one version older. The Kubernetes version can be specified to kubeadm by using the --kubernetes-version flag of kubeadm init or the ClusterConfiguration.kubernetesVersion field when using --config. This option will control the versions of kube-apiserver, kube-controller-manager, kube-scheduler and kube-proxy.

kubeadm's skew against the kubelet

Similarly to the Kubernetes version, kubeadm can be used with a kubelet version that is the same version as kubeadm or one version older.

There are certain limitations on how kubeadm commands can operate on existing nodes or whole clusters managed by kubeadm.

To learn more about the version skew between the different Kubernetes component see the Version Skew Policy.

Multiplatform container images for the control plane and addons are also supported since v1.12.

If you are running into difficulties with kubeadm, please consult our troubleshooting docs.